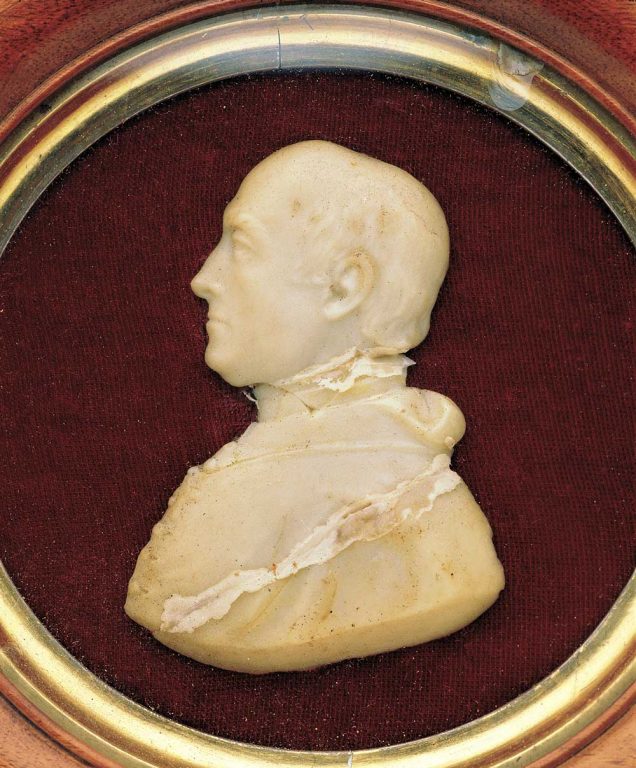 This c.1848 framed wax medallion is the first Australian portrait of our pioneering bishop, William Willson (1794–1866), and depicts him wearing a mozetta. The vestment is a sign of jurisdiction and can only be worn by the Pope, cardinals and—within the limits of their jurisdiction—by archbishops, bishops and abbots. The portrait must have been executed soon after the subject’s return from Europe in April 1848 and is mounted in a circular frame. An identical medallion but in a more elaborate gilt frame surmounted by a cross, and likely Willson’s own copy, is in the collection of the Queen Victoria Museum and Art Gallery, Launceston.

Our copy bears evidence of having been broken and clumsily repaired. Its provenance is inscribed in ink on the reverse of the frame: ‘Profile in Wax of Bishop Willson; 1st Catholic Bishop of Tasmania [sic] In the possession of Henry Hunter, – Hobart – 1854’. Willson’s protégé, Henry Hunter (1832–1892) was Tasmania’s dominant architect of the second half of the nineteenth century. In 1854 he was still a year away from being launched on his architectural career by Willson and was working in the timber industry on the Huon, south of Hobart. The medallion may have been a gift from Willson.
This profile of Bishop Willson was sculpted by Theresa Walker (1802–1876), who is best known for her miniature portrait medallions in wax. For some thirty years from around 1840 she produced portraits of varying quality of both eminent and humble personages in the Colonies of South Australia, New South Wales, Tasmania and Victoria. Her portrait of Willson was made during her two-year residence in Hobart from 1848 and has been judged to be one of her finest portraits from this time. Theresa was Australia’s first female sculptor, a serious professional artist ‘who exhibited at the most prestigious exhibition venue in the British Empire, the Loyal Academy, London’.