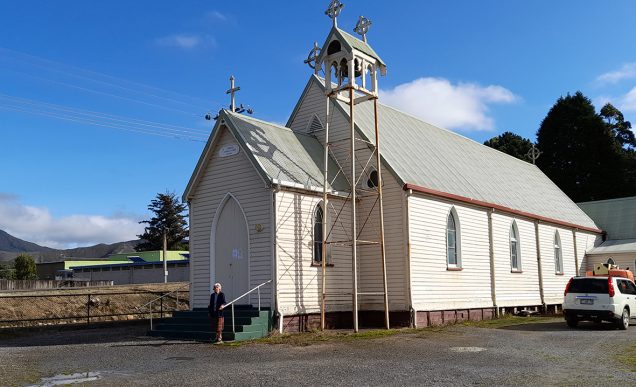 In its mining-boom heyday, Zeehan was known as Silver City, with a population of 10,000 and more than 20 pubs.

Throughout the ebb and flow of the town’s history, one thing has remained constant: the eye-catching St Fursaeus Church has been a focal point for Catholic worship in the area.

Now, it is the only church still operating in the town, a landmark with its weatherboard construction and bell tower, even if, as Fr Graeme Howard observed, it does have a slight lean these days.

Fr Howard knows the building well. He and his three brothers grew up in Zeehan, where his father worked in the timber industry.

It was the setting for his first Holy Communion and Confirmation, and where he celebrated his first Mass after his ordination in Hobart in July 1962.

Fr Howard, now 84 and living in Blackmans Bay, is a frequent visitor back to the stamping grounds of his youth.

He concelebrated Mass at St Fursaeus Church on April 25 with West Coast parish administrator Fr Amalorpavaraj Devadoss and took part in blessing the church as part of 130th anniversary festivities.

The church’s cornerstone was laid in April, 1891, and the first Mass was celebrated in November 1891. Archbishop Julian is expected to celebrate Mass at Zeehan in November.

When Fr Howard recalls the church, his memories are inevitably tied up with the congregation – many were his relatives – and the priests of the day. His anecdotes are laced with deep affection, humour and no small amount of West Coast pride.

“My memories [of St Fursaeus] go back to the 1940s, attending Mass with my mother, father, brothers, grandmother and aunties who lived close to us,” he said.

“Sunday was always time when we would go to Mass, picking Grandma up on the way, and invariably, arriving late. The parish priest was an Irish priest, Fr Joe Cullen: He died in Roseberry and is buried in Zeehan. He would wait for us [to arrive]. Grandma would then have to go through her handbag and get out her rosary beads, put her walking stick in place and get settled. Fr Joe Cullen would wait for her to get organised. But the next priest was different – he did not wait.”

Incidentally, two brothers of Fr Joe were also priests. Fr Arthur Cullen, was priest at Cygnet and Monsignor John Cullen was at St Joseph’s in Hobart.

“Fr Joe was as a lovely gentle man and so easy to get on with. He was there a long time, well over 20 years. He didn’t want to leave. Nobody ever wants to leave Zeehan, of course,” Fr Howard said.

“The church was a big part of our lives, growing up.

“Sunday night was Benediction. My brother and I, and my cousins, we would serve. We would go there and get dressed up. Then we would ride our bikes home in rain, and throw stones on policeman’s roof on the way past.

“There was a real gathering of people there for my first Mass almost 60 years ago.

Fr Howard suggested that ‘more talent and religion’ – and a considerable number of priests – hailed from the West Coast of Tasmania than anywhere else in Australia.

“Priests who go there [to the West Coast] never want to leave,” Fr Howard added.

“This church opened in 1891 and is the only one still open in the town. The history of the town is caught up in the building.”

Fr Howard said that up to 40 people had attended Mass on April 25 with some travelling from Hobart. This was followed by a prayer at the foundation stone, with 27 then going out to lunch at nearby Hotel Cecil.

“We are all now looking forward to the big celebration at the end of November, marking 130 years since the first Mass,” Fr Howard added.

He praised and thanked parishioner Eleanor Phelan, of Dundas, for her energy and enthusiasm in organising celebrations at St Fursaeus.

Mrs Phelan said: “The church is just beautiful. It is one of the oldest weatherboard churches still in existence. I just love being here. It is a special church inside too.”

She explained that a number of events had been held to help raise money for maintenance work, including renting out the convent at the back of the church, running raffles and holding a market. The local men’s shed had helped with repairs.