‘Let Him make you a saint’: Fr Rob 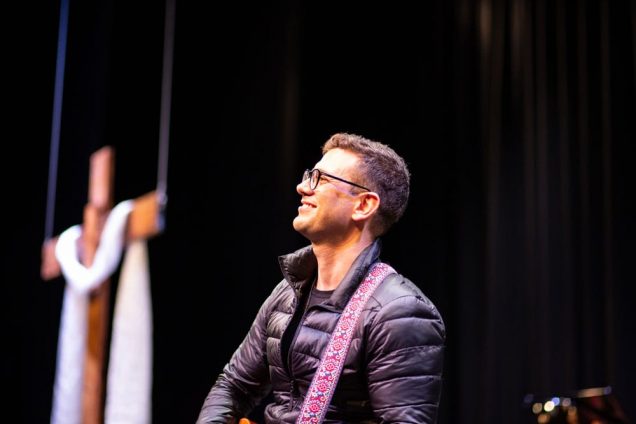 A stellar line up of guest speakers and presenters enthralled hundreds of Catholic students and young adults at the festival days and night rallies of the Tasmanian Catholic Youth Festival earlier this month.

Around 350 students participated in youth festival days at Guilford Young College’s Glenorchy campus on May 5 and Devonport’s St Brendan-Shaw College on May 7; while 90 more attended candle-lit night rallies at St Mary’s Cathedral in Hobart, and the Church of the Apostles in Launceston.

The theme for the festival was taken from Christus vivit (‘Christ lives’), Pope Francis’ Apostolic Exhortation dedicated to young people, with a particular focus on the topics of ‘Fall in love with Christ’ and ‘You are loved by Christ’.

Caretaker Director of the Office of Youth Evangelisation for the Archdiocese of Hobart, Sam Clear, said the students and young people had an ‘amazing’ time at youth festival events.

“Christianity is not an academic subject. It is lived,” Mr Clear said.

“The festival gives [young people] the opportunity to encounter faith and to live faith, [and] to do that with people their own age,” he said.

“The hope always is that these festivals and night rallies become stepping stones in that continued faith journey as we head into other events as a community and we continue to both strengthen our relationship with Jesus in prayer, and also in our friendships with one another as a Church,” Mr Clear said.

A highlight of the youth festival were performances by musician-priest Fr Rob Galea whose personal journey from rebellious teenager to the priesthood is now being made into a feature film.

Other activities included talks by Archbishop Julian and Sr Gemma Marie Lacanilao of the Sisters of the Immaculata, music by Kirks and Company’s Anna and Aodhan Kirk, a panel discussion on being in love, an expo and workshops on encountering Christ in various ways including prayer, friendship and love, the arts, life’s journey, and youth.

Both festival days also involved times of Eucharistic adoration. In Devonport, Fr Galea processed through the crowd with the Blessed Sacrament, and blessed the young people.

Matilda, a Year 11 student from St Patrick’s College in Launceston, shared in the college newsletter about the impact of the festival.

“The day was filled with enlightening discussions that as an individual have shaped the way I think about my faith. Talking to the Immaculata Sisters and [Fr Chathura de Silva] at the festival has led me to want to be more involved in St Patrick’s College school life and parish community. The TCYF is definitely an event I will be taking part in next year to continue my spiritual growth and development,” Matilda said.

During his visit to Tasmania, Fr Galea, 39, from the Sandhurst Diocese in Victoria, also surprised students at St John’s Catholic School, Richmond, where he performed Faith in the Future, a song he wrote for the 200th anniversary of Catholic Education in Australia. While Fr Galea sang, St John’s student choir performed the song using AUSLAN.

Interviewed in Hobart, Fr Galea said he enjoyed sharing with young people a ‘message of hope that only Jesus can bring’.

“I want to tell people about Jesus,” he said.

“First of all, I don’t see myself as a musician. I see myself as an evangelist, as a preacher, as someone who goes out to proclaim the Gospel. Now, I use music because I think music is so powerful. Music transcends the mind and goes straight to the heart.”

Asked about his message for young people, Fr Galea said: “Don’t be afraid.”