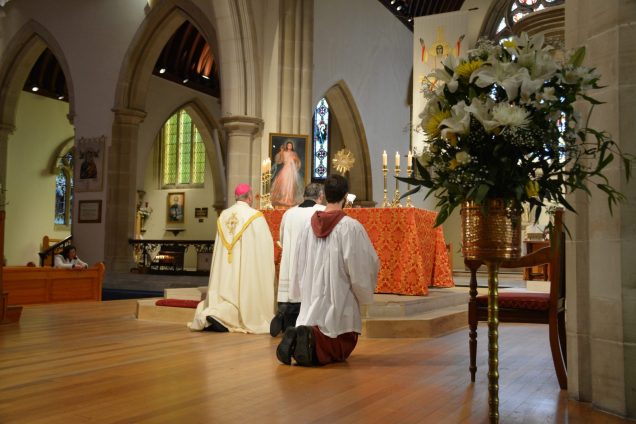 The key message of Divine Mercy Sunday is that God is merciful and He loves us all.

Tasmania’s Catholics attended Divine Mercy devotions around the state on Sunday, April 11, including at Hobart, Glenorchy, Launceston and Devonport.

At St Mary’s Cathedral in Hobart, a holy hour of Eucharistic adoration and the sacrament of Reconciliation was followed by Mass.

In his homily, Archbishop Julian explained that Divine Mercy Sunday was introduced into the Liturgy in the year 2000 by Pope St John Paul II, following the instruction given by the Lord which St Faustina reported. The first appearance of Jesus to St Faustina, a Polish religious sister, occurred 90 years ago, in 1931.

“The Divine Mercy image is a contemporary expression of what the Lord did for his apostles on Easter evening and again one week later for Thomas: the Lord appeared and showed his wounds,” Archbishop Julian said.

“The image … shows the wound of the heart illuminated with healing rays of light. The image reflects what St Peter, quoting the Prophet Isaiah, declared, ‘By his wounds we are healed’ (I Pet 2:24)

“… From the wounds of Christ grace flows upon the soul.”

Maree Triffett, of Hobart, helped to organise Divine Mercy devotions and said they had a special significance this year as the Pope had declared it the Year of St Joseph.

“He appeared to St Faustina and promised her special help with this devotion … St Joseph has great love of and is patron of Divine Mercy.”

Mrs Triffett added that the devotions went well, with attendance numbers up on 2019 (2020 was disrupted by COVID-19), and many great blessings flowing from that.

“There is special grace attached to the Feast of Divine Mercy and that is that … Jesus [told St Faustina], ‘The soul that will go to confession and receive Holy Communion shall obtain complete forgiveness of sins and punishment’.

“… As well as being a grace for us, Jesus specifically asks that we be merciful to others. So that is the other side of the grace.”

“If we receive His mercy then we must be merciful to others.”

St John’s Church at Glenorchy hosted a holy hour of Eucharistic adoration with the sacrament of Reconciliation followed by Mass and veneration of the Divine Mercy image.

In Launceston, devotions at the Church of the Apostles included veneration of the image of Jesus, Divine Mercy Chaplet, Rosary, 3 o’clock prayer, Litany of Divine Mercy and Benediction.

At Our Lady of Lourdes in Devonport, Divine Mercy devotions followed the 9.30am Mass.