Remembering the sacrifice of students who served 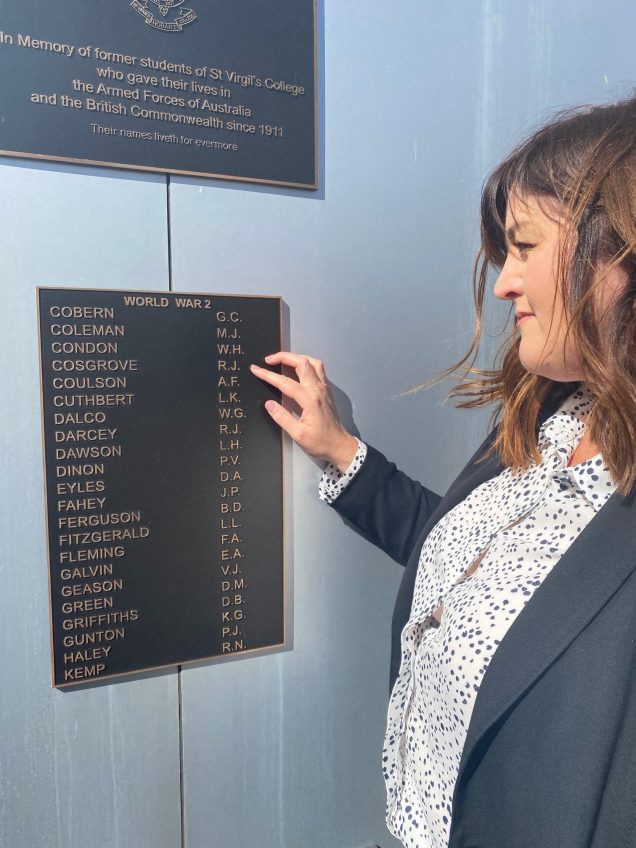 Every Anzac Day, the students at St Virgil’s College lay a wreath at the Memorial Wall and Garden, nestled within the school grounds.

The historical monument honours the former pupils who went on to fight for their country, including the 62 Old Virgilians who lost their lives in war.

Acting Principal Heidi Senior said the Memorial Wall had deep significance for the school community not only on commemorative occasions, but year-round.

“The wall recognises that St Virgil’s has played an important role in the community,” she said.

“The boys understand they are part of a bigger story – a story that includes the 10,000 boys who have come before them. It helps them make aspirations for their own lives.”

Mrs Senior said the Memorial Wall makes history into a more tangible experience for the boys, who benefit from the connection to past students.

“They can visit the wall and understand that boys not much older than themselves, wearing the same uniforms, went off to war,” she said.

“It is important that the students think about how they in turn can be of service to the community, that they recognise the sacrifice that went into preserving the way we live now, and that they can appreciate how lucky we are today.”

“It is particularly special to me as my great uncle Bobby has his name up on the wall there,” she said.

“He was a RAAF pilot. His plane took off from Waddington for mine-laying operations and was never seen again.”

The aircraft is believed to have crashed in the sea off Mablethorpe, Lincolnshire.

“Those in my generation usually grew up with a grandparent or two sharing personal accounts of the wartime experience. We take it for granted, but lots of teenagers now don’t have that.”

Mrs Senior said good custodianship of the Memorial Wall and Garden was a responsibility St Virgil’s staff took to heart.

“We want to make sure it isn’t just a token thing that becomes invisible. It is important that we make the most of opportunities to engage the boys with it quite intentionally.”