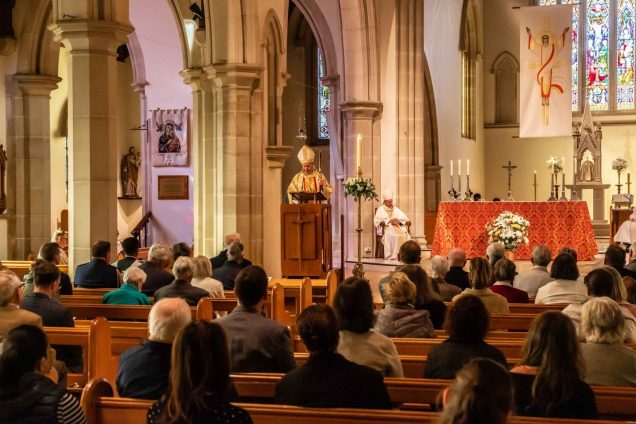 The Church in Tasmania has celebrated the 200th anniversary of the arrival of the state’s first Catholic priest with a Mass at St Mary’s Cathedral in Hobart.

The anniversary marks the bicentenary since Fr Philip Conolly, one of the first two officially-sanctioned priests to minister in Australia, disembarked in Tasmania. He had travelled aboard the Prince Leopold from Sydney and arrived in Hobart on April 14, 1821.

Fr Conolly had served as a priest for five years in Ireland before volunteering for the mission in Australia. Although he was based in Hobart, he travelled around the state celebrating the sacraments and ministering to the Catholic population. He died in 1989 after having served most of his priestly ministry in Tasmania as the island’s sole priest.

The celebratory Mass at St Mary’s Cathedral was held on Sunday, April 18, attended by the Catholic faithful as well as guests including Governor of Tasmania, the Hon. Kate Warner AC.

In the homily, Archbishop Julian noted that the bulk of Fr Conolly’s ministry was to the convict population.

One of his earliest duties was to minister to convicts who had been sentenced to death. This task would be repeated throughout his priestly ministry.

His ministry was not only to prisoners. He celebrated marriages, baptised infants and presided at funerals. He also played a role in the Catholic education in Tasmania.

“In 1823 he opened a school, the second Catholic school in Australia, across the road in Harrington Street,” His Grace said.

The candlesticks and the crucifix on the altar for the Mass were those donated to Fr Conolly by an Irish benefactor.

A book written by Tasmanian historian Dr Nick Brodie to mark the anniversary Philip Conolly: A Bicentennial History of Tasmania’s First Catholic Priest, was also launched at the Mass.

A copy of the book can be ordered and purchased via our secure B Point facility for $10.00 per copy (includes postage)