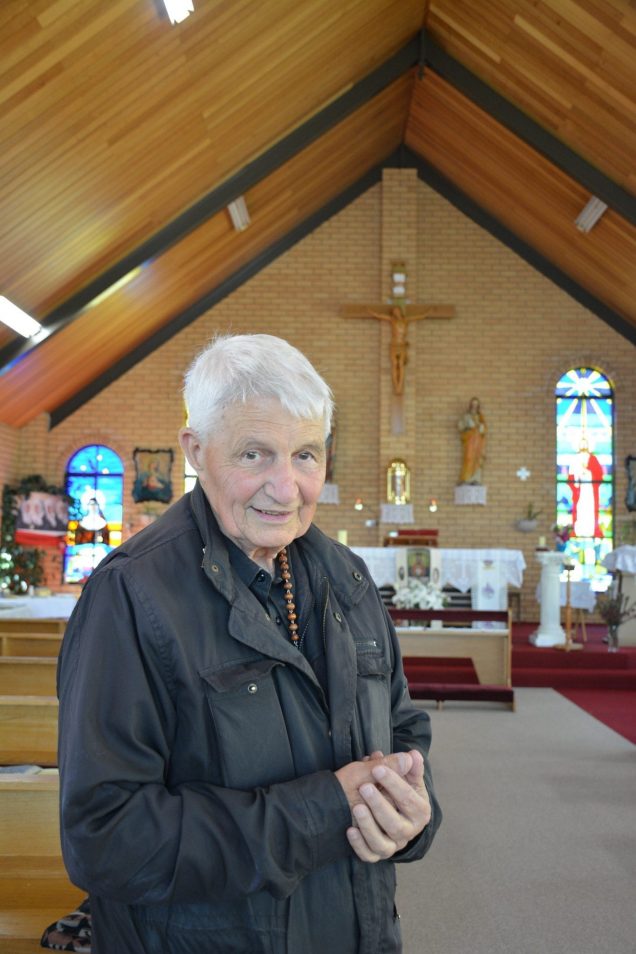 “I’m not the Holy Father, but the Lolly Father,” says Fr Berislav Hunski, the candy-distributing chaplain to Tasmania’s Croatian Catholic community who is celebrating 40 years of priesthood.

It should have been his 60th anniversary, notes the 85-year-old Fr Hunski, but Communist intervention during his high school education meant that his vocation was put on hold.

Born in the former Yugoslavia during the Spanish Civil War, Fr Hunski’s first language is Spanish, due to Spanish refugees taking on child minding duties for his family.

When he was still a child, his parents were imprisoned for their political beliefs and Fr Hunski was raised by aunts.

He went on to study Classics in high school at the equivalent of a minor seminary, until he and other seminarians were removed from school. He was instead put to work in a chemical laboratory.

After the laboratory came a stint of national service, before Fr Hunski fled his country and ended up in a refugee camp in Italy.

He emigrated to Australia and became an Australian citizen. English is his ninth language.

In the 1970s his mother became ill and he travelled back to Yugoslavia to see her. However, his passport was confiscated by the authorities and he was unable to leave.

Fr Hunski served in Croatia for five years. To procure a bell for one of his churches, he melted down empty ammunition shells and a statue of the Communist leader Tito.

“I said to people: ‘Hurry up, Tito is calling you to come to church!”’

Fr Hunski was sent to Australia as the chaplain to Tasmania’s Croatian Catholic community in 1986.

Always ready with a joke, Fr Hunski says he doesn’t know how he arrived so late to the penal colony of Tasmania, now having served here for 35 years.

Initially celebrating Masses at St John’s Church in Glenorchy, the Croation community soon made plans to build a presbytery and community centre, and a church.

Fr Hunski took an active hand in building the Croatian church in Granton, particularly the bell tower, which he warns visitors to walk past quickly in case it falls down.

Last year, to ensure its future, the Church of Our Lady Queen of Croatia and Queen of Peace was gifted to the Archdiocese of Hobart, with the Croatian community retaining full use and access.

Fr Hunski celebrates daily Mass in English each morning at 8am, and in Croatian at 11am on Sundays.

To aid the spiritual journeys of parishioner and visitors, Fr Hunski has a large collection of Catholic literature for people to borrow or keep, along with scapulars, bottles of Lourdes water, devotional pamphlets, medals and other spiritual aids – all for free.

“One good book can put a person in the right way,” Fr Hunski said.

Secretary of the Croatian Catholic Church Committee Ivan Mamic says Fr Hunski is dedicated to helping people focus on what is important, to read things that will lead them to God.

“He doesn’t sell anything. It’s all there for people to – even if they’ve just picked it up – just to grab their interest, to pull them back from a world which is very difficult to break away from … to focus back on God, the most important thing,” Mr Mamic said.

He says the Croatian community is privileged and happy to have Fr Hunski available to celebrate Mass and extend their Croatian culture to the most important part of life – religion.

Jokes about converting Tasmanian devils aside, for Fr Hunski, the greatest joy of his priesthood has been celebrating the Eucharist.

He says that despite his advanced years he is grateful to still be able to serve.

“I’m thankful for every Mass that I can offer,” Fr Hunski said.

He says that his 40th anniversary pales in comparison with the 2021st anniversary of Christianity.

“All that is good comes from God,” he said.

“I’m just trying to meet my teacher and nobody’s excused. Everybody has to pray for me that I could do it.”

His 40th anniversary was celebrated on April 17 with a Mass at the Croatian church with Archbishop Julian and priests of the Archdiocese of Hobart present.

Mr Mamic says there was plenty of laughter and jokes, and that the children presented Fr Hunski with a basket of lollies.

Main image: Fr Hunski inside the Church of Our Lady Queen of Croatia and Queen of Peace in Granton. Photo: Naomi Leach.

If you have any further questions, please contact the Safe Communities Office