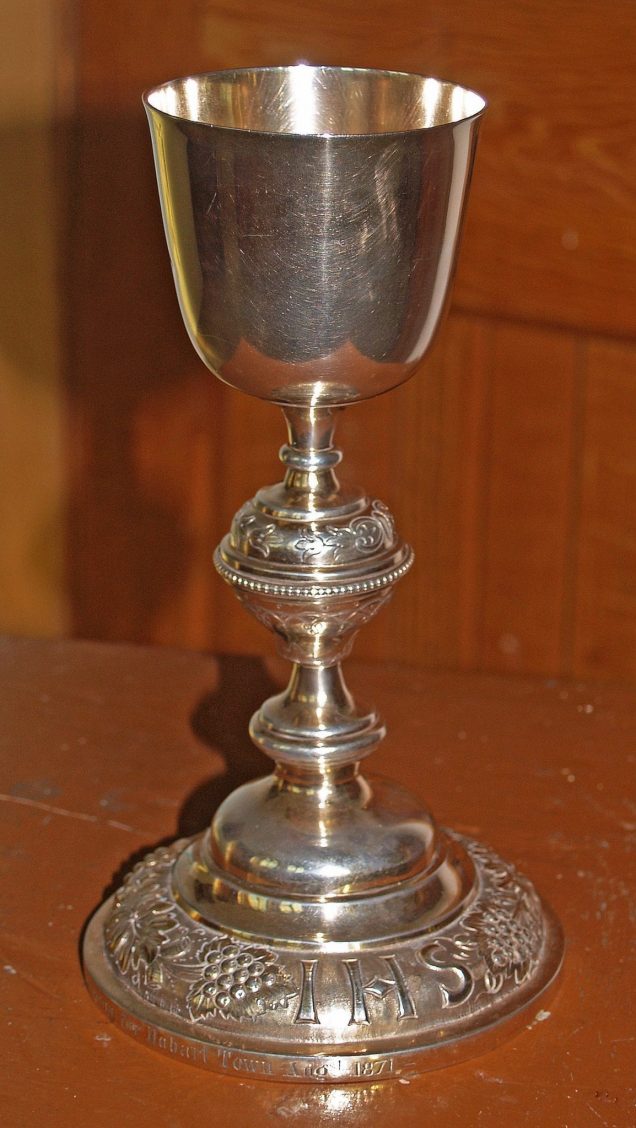 Tasmania has been blessed with the priestly labours of Irish clergy for some two centuries, commencing with the arrival of the pioneering priest Fr Philip Conolly in 1821, and lasting until the death of Fr Liam Floyd in October 2020. Fr Floyd was ordained at the great missionary college of All Hallows, Drumcondra, and faithfully ministered to Tasmanian Catholics for 67 years.

Amongst the many tangible reminders of Irish priestly presence here is an important historic chalice with specific links to Hobart. Of sterling silver, parcel-gilt, it was made by the Dublin silversmith Samuel Le Bas in 1871 and bears the following inscription engraved on its foot: ‘To Revd. Michael O’Regan – by the Parishioners of Passage West – on his leaving for Hobart Town – Augst [sic] 1871’. Passage West is a town on the west bank of Cork harbour.

Fr Michael Joseph O’Regan was ordained to the priesthood in Hobart by Archbishop Murphy, going on to labour for over half a century in New Norfolk, Campbell Town, Brighton, Queenstown, Hobart and Lower Sandy Bay, the latter as chaplain to the Good Shepherd Sisters and women at Mount St Canice.

After his death in February 1924 a tribute was paid by Fr T.J. O’Donnell, who wrote that: ‘He was of a most attractive disposition, and his kindly character earned him the love of his own people and the admiration of many who were not of his church. At Queenstown, where he worked for several years, he was much esteemed. He was a great friend of the poor and needy, and many a heart and home was gladdened by his generous-hearted assistance in the time of need. … He lived and died as he would have wished, actively engaged in doing good to others. In all the churches in the State on Sunday prayers were asked for the repose of his soul, and the references made to the deceased priest by those who had known and worked with him were of a very high and complimentary nature. The Catholic Church in particular, and Tasmania in general, is the poorer for the passing of such a sterling priest and citizen as was Michael Joseph O’Regan.’