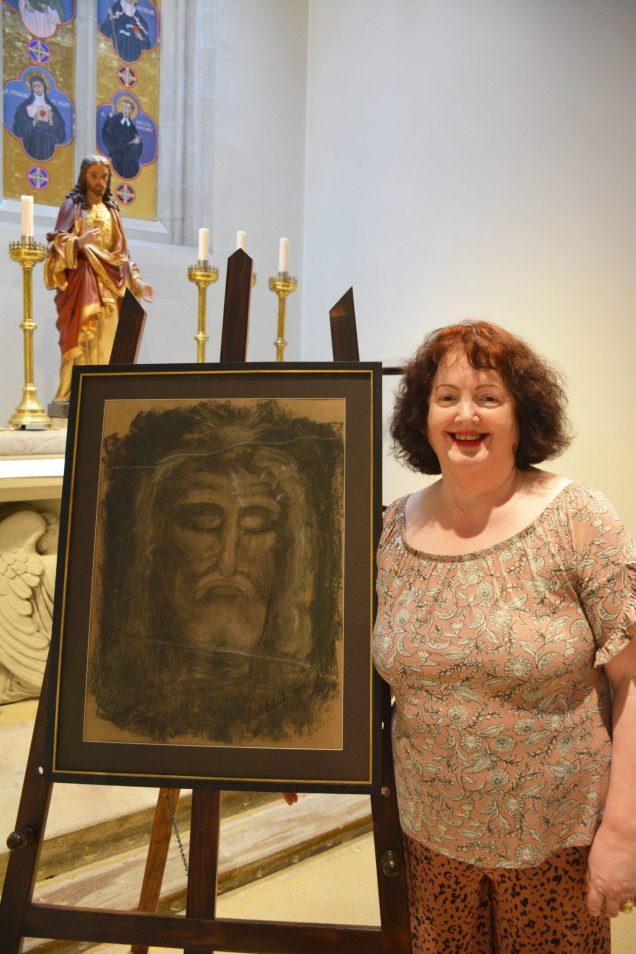 Parishioners and visitors to St Mary’s Cathedral are being drawn more deeply into the mystery of Easter through an artwork which has been on display throughout Lent.

The enthusiastic response to the artwork has surprised no-one more than the artist herself, parishioner Gabriele Blanch, of New Town.

Ms Blanch – who mainly paints acrylic still life compositions – took inspiration for the piece from the face of Jesus represented on the Shroud of Turin.

“I felt like I had a mad urge to do it, and I thought: I’m not good at drawing portraits!”

It is one of the few religious artworks she has ever attempted, and Ms Blanch, 60, says she was conscious of praying before she began, and occasionally during the process.

The artwork in St Mary’s Cathedral is her second charcoal drawing of Jesus’ face inspired by the Shroud – she showed the first to a friend who then offered to buy it.

Ms Blanch says she did the second piece because she wanted it for herself. She found it had a powerful effect on her, feeling compelled to bow to the image of Jesus’ face whenever she entered the room.

“I thought: it’s not even blessed!” Ms Blanch said.

“I thought I’d show the ladies at the Saturday prayer group and they loved it.”

When one of the prayer group offered to pay for the artwork to be framed, Ms Blanch decided to donate it to the Cathedral, where it is on display in the Sacred Heart Chapel.

There are now plans to make the artwork into a prayer card.

Cathedral parishioners have expressed their admiration for the artwork, and have said it has helped them to visualise the death and resurrection of Jesus, says Cathedral Parish administrator Fr Leonard Caldera OFM.

“I’ve seen people just sitting on the pew and looking at the picture and praying. I think it’s quite good and helping them connect with Our Lord.”

Fr Leonard says he is a believer in the use of religious images in prayer.

“I think the image of this from the [Shroud of Turin] is really helpful for us to visualise the suffering that Jesus went through because of us,” he said.

“It helps people to really understand and comprehend the divine mysteries in a very easy and tangible way.”

He says that even visitors from the mainland have enquired about the artwork.

“There’s quite an interest in the picture. I think that’s the positive thing. And to see many people, especially after Mass, come and pray.”

Ms Blanch says it is important to depict the suffering that Christ endured.

“We just want to know the pleasant part. He was on the cross and he gave his life for us, and that’s the reality,” she said.

“If it means that people might think about him more – that’s marvelous, if my humble picture can make people think and realise what he’s done.”