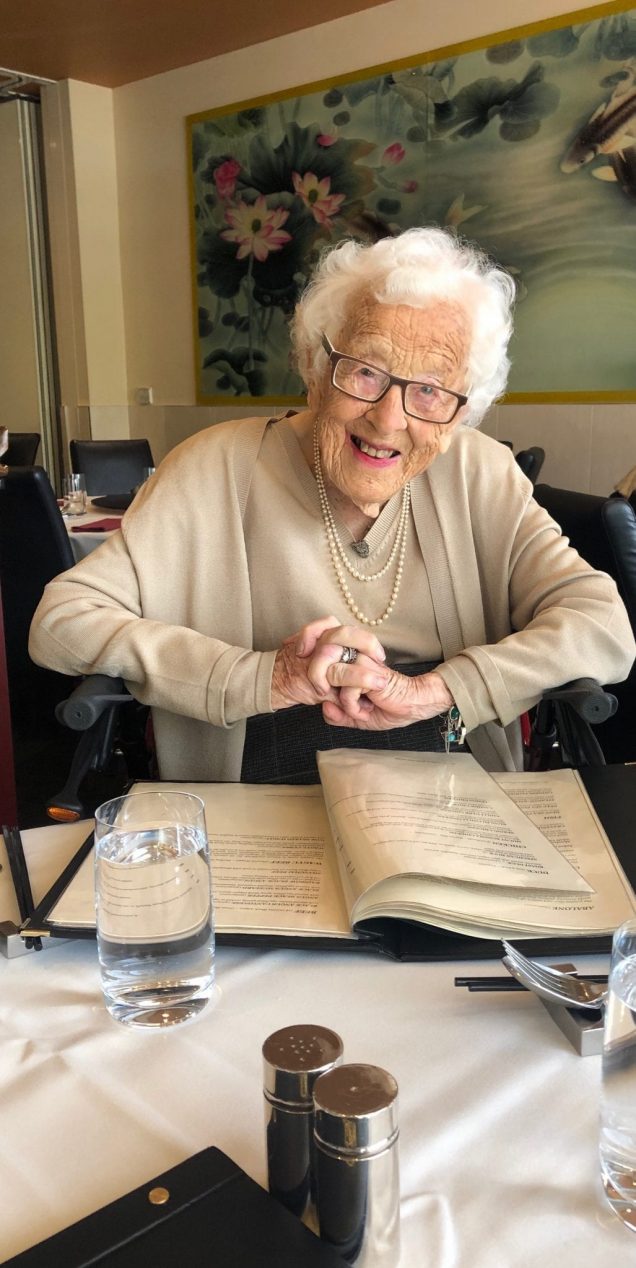 Launceston Catholic parishioner Marjorie FitzPatrick has led a remarkable life, and, as she is quick to point out, it is far from over.

Mrs FitzPatrick attended Mass regularly all her life until last year. Now 106, she remains a sparkling conversationalist with a keen sense of humour and an impressive knowledge of Tasmanian events and people over the past century.

Born in 1914 in Hobart into a strong Catholic family, her mother was Blanche (nee Kelly) and her father was Richard Darcey, a Labor Senator for Tasmania (1938-44). He had been president of the St Vincent de Paul Society in Hobart, a member of the St Joseph’s branch of the Hibernian Australasian Catholic Benefit Society, and represented the Archbishop and the Catholic community on the United Social Services Committee.

“My father was a very good man, and a very good Catholic, and my mother was too,” Mrs FitzPatrick recalled from her Launceston home.

“I always went to Mass. I wouldn’t miss it.”

“When we were young, we lived in North Hobart and we used to have to walk to Mass at St Mary’s Cathedral. It took 15-20 minutes. Sometimes we drove.

“I was baptised there, confirmed there, made my first confession there. We were involved in whatever went on there.”

Mrs FitzPatrick was educated at St Mary’s College, Hobart, (from 1919 to 1932), as her mother was before her, and her daughter afterwards.

It was here that Mrs FitzPatrick developed a love for reading and sport, particularly tennis and basketball. She was also one of the first prefects at St Mary’s. Later, she continued to play tennis at the Catholic Tennis Club in Hobart, started by Irish priest Fr Denis Murphy opposite St Virgil’s.

“He was the only Tasmanian pilot who flew spitfires in the Second World War,” Mrs FitzPatrick said. “The spitfires saved England in the Battle of Britain, and he was in the middle of that.”

Brothers Len and Richard were opticians in Hobart. When Richard joined the war effort, Mrs FitzPatrick was trained to take over his role as an optical mechanic, carrying out precision work making prescription glasses.

“All through World War Two, I was in the workshop making glasses.”

“It was very precise work – it had to be perfect, otherwise it was wrong. I worked hard. The glasses were made of glass, not plastic and made by computer, as they are now. I was the only woman in Tasmania doing this type of work at the time.”

In the 1980s, Mrs FitzPatrick moved to Launceston to be closer to her daughter, son-in-law and two granddaughters. She became a much-loved parishioner at St Patrick’s at Prospect, the Church of the Apostles in Launceston and later Sacred Heart Church at Newstead.

Mrs FitzPatrick continues to receive communion at home, attends the Launceston Cup each year, and remains a wily contract bridge player. She cooks ‘with a glass of brandy in one hand’, reads voraciously and enjoys the company of family and friends. She stopped driving at age 101.

“I am sustained by family, friends and faith.”

“I have a mantra – I do what I can while I can. I have no particular secrets about longevity except that I have always kept active – I played golf in latter years – and I still go for a walk for about 20 minutes every day.

“I am grateful for many things and many blessings.”