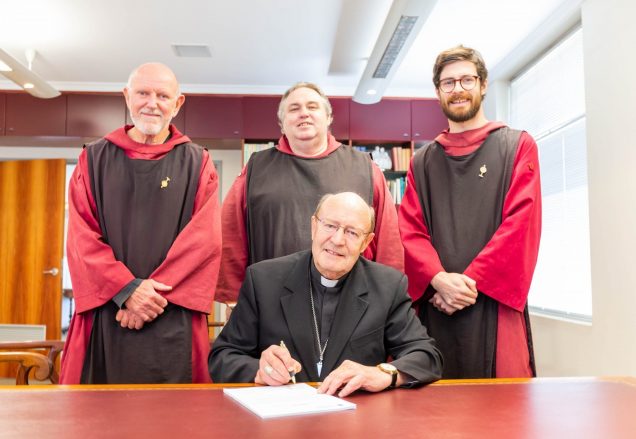 Tasmania’s Little Eucharistic Brothers of Divine Will have become a Public Association of Christ’s Faithful in the Archdiocese of Hobart following the signing of a decree by Archbishop Julian.

The Little Eucharistic Brothers of Divine Will are a contemplative-active community of men living in Dover.

The community was formed in Perth in 2013 and had previously been associated with the Apostles of Perpetual Adoration, a Public Association of Christ’s Faithful established in the Archdiocese of Perth to promote perpetual Eucharistic adoration.

Following the decree, the Little Eucharistic Brothers of Divine Will have now become a Public Association of Christ’s Faithful in their own right canonically, although the brothers say they still retain a spiritual connection to the Apostles of Perpetual Adoration.

“It also means that we’re now integrated into the Church [in] Tasmania in a more integral way,” Brother Gilbert Joseph said.

The brothers, who live a charism of hiddenness, like the hidden life of Jesus, Mary and Joseph in Nazareth, currently organise various times of Eucharistic adoration in their parish of the Huon Valley including the Lenten 24 Hours for the Lord.

“We try to remain as hidden and in the background as possible, while helping where we can in the parish,” Br Gilbert Joseph said.

The decree was signed by His Grace on March 12.