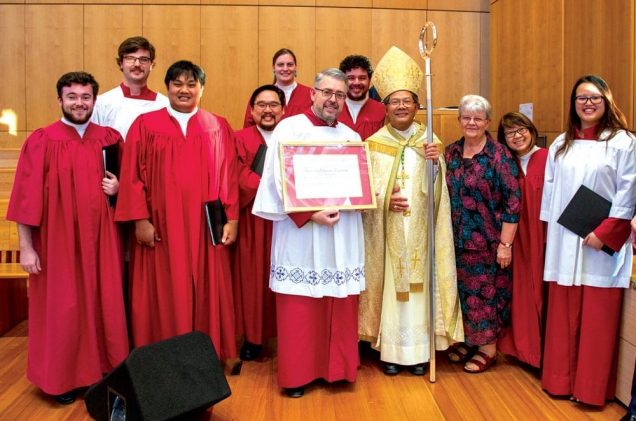 The first time Bernard Kirkpatrick heard the organ playing at Holy Trinity Church in Westbury, he knew he wanted to devote his life to sacred music.

A young boy at the time, he could scarcely have imagined the illustrious liturgical music career stretching out in front of him.

The Tasmanian-born Mr Kirkpatrick was recently honoured with a papal knighthood in the Order of St Sylvester for his services to sacred music in the Church in Australia.

“It was a complete surprise and very humbling,” Mr Kirkpatrick said.

“It is an honour to have this recognition of my work, which is also a recognition of all the people I have been encouraged and supported by over the years.”

He received the papal honour at a ceremony held in the Diocese of Parramatta in December.

Mr Kirkpatrick, now Director of Music at the Diocese of Parramatta’s St Patrick’s Cathedral, said it all began in the local parish churches of Burnie, Westbury and Oatlands.

“I would search out hymn books and chant books that sparked my interest,” he said.

“I am still a great lover of Gregorian chant and renaissance polyphony today.”

After completing his early music education with the Sisters of Mercy at Stella Maris convent school and then under the Marist Fathers at Marist College, Mr Kirkpatrick moved to Sydney for university study.

In 1988 he won the Sydney Organ competition and was subsequently appointed assistant organist at St Mary’s Cathedral in Sydney.

An acclaimed recitalist, Mr Kirkpatrick has given many performances, including at the Sydney Opera House.

“The organ is such a beautiful, majestic instrument,” he said.

“Music has always been the main thread of my life and my faith.”

In addition to his role at St Patrick’s Cathedral, Mr Kirkpatrick has also taught several generations of students at Holy Spirit Seminary in Parramatta and the Good Shepherd Seminary in Sydney, and is the musical director at Campion College in Toongabbie.

Mr Kirkpatrick said he has a particular interest in drawing music out of the rich treasury of historic sacred music and finding a place for it in contemporary liturgical context through a “synthesis of form, musical language and instrumentation”.

His favourite memories include meeting Pope St John Paul II at a private Mass in the Vatican.

“That was very special,” he said.

He also oversaw the publication of the Catholic Worship Book II, one of several Mass books recommended for use in Australia.

Mr Kirkpatrick’s greatest satisfaction, however, comes from sharing his depth of knowledge and experience with others and “encouraging younger generations of musicians and clergy who bring their talents to the service of the liturgy and God’s people” – just as he once found support in the local parishes of his childhood.