Healing and heaven at Mission School in Cygnet 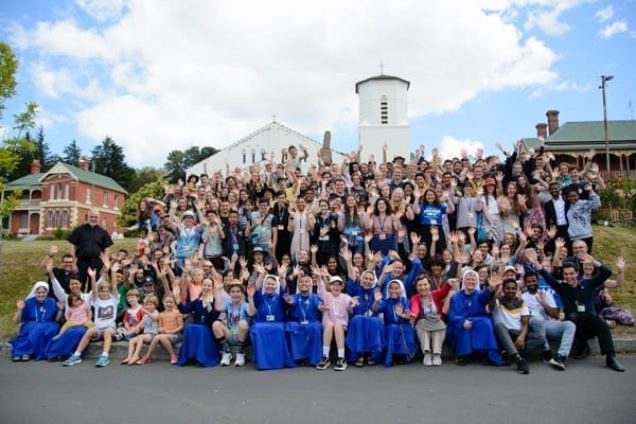 One hundred and eighty young people and families began the new year by looking to the future – their eternal future – at the five-day Immaculata Mission School in Cygnet.

The January 1-5 mission school drew participants from around Tasmania and interstate for talks, prayer, music and fellowship centred on the theme ‘Made for Heaven’.

Held at St James’ College in Cygnet, the mission school also included a COVID-safe bush dance, and an outreach night with priest-musician Fr Rob Galea, of the Diocese of Sandhurst in Victoria, who has performed at World Youth Days and has an Instagram following of more than 60,000.

It was the first time Fr Rob had performed at a public event since lockdowns began in March last year.

Mother Mary Therese Ramsden of the Sisters of the Immaculata says that the Mission School meant young people could be brought together to share their faith together, to know they are not alone, and be strengthened by God.

Each day began with Eucharistic adoration and the rosary, followed by Mass.

“That’s when their lives are transformed. So many young people have had a big encounter, really. It’s been the prayer time where they’ve been able to open their hearts to God and to really have a personal relationship with the Lord,” Mother Mary Therese said.

For recent Catholic convert Kristian Figuracion, 29, from Perth, the Mission School will be remembered not just for its talks for times of prayer, but for being the place he made his first Confession and received his First Holy Communion after being prepared by his RCIA coordinator, who was also present.

“I loved it, I loved it! And I’m going to definitely be taking a lot of things that I’ve been learning from here back home. … I was convicted about the Eucharist, but I never really had such a big reverence until just the last few days, just from being here.”

Oliver van Rensberg, 19, of Melbourne, heard about the Mission School through a fellow Campion College student and says that he now wants to deepen his prayer life.

“This is what true Catholics are meant to be like, just absolutely in love with God … it’s stunning. You see it in other people and you want it. And the talks are phenomenal,” Oliver said.

Fifteen-year-old Joseph, of King Island, says the talks by Fr Rob Galea and James Parker went ‘straight to the point’ and that adoration and praying in the church was a highlight.

“I think just being alone and still being in the church was something I hadn’t had enough of. And being fidgety and stuff at the beginning and learning to be still and just being in the presence of God was the biggest thing,” Joseph said.

For Mary Fulton, 18, of Smithton, the attraction of Mission School was the chance to connect with other young Catholics.

“I just met so many friends and heard so many stories form other people’s faith journeys, and learnt a lot about my faith and had a lot of opportunity to pray through adoration. But probably the best part was just meeting other Catholics my age,” Mary said.

Programs for children and teenagers ran concurrently with the main sessions, to allow parents to listen to the talks.

Launceston mum and dedicated parish volunteer Jodie Campbell, 45, came to support her teenage son Mitchell, but says she has taken so much away herself.

“If this mission school has taught me anything, it’s that you are never too old to go back to the heart,” said Jodie, who is a reader, a Eucharistic minister, and helps with her parish’s sacramental program.

“I did it to come to support Mitchell, but then I have walked away with such a light inside me … Everything was about healing, loving thy mother and thy father, understanding the earthly versus the heavenly and how they are connected,” she said.

She says Mitchell has told her that he wants to start praying the rosary, and the St Michael’s Chaplet.

“I think as a family, Mitchel and I are going to grow our faith through prayer. We do pray … but that can be deepened.”

Jessica Daniels, 29, of Cygnet, attended the Mission School with her husband Toby, and three young children.

She says the opportunity to sit and listen to the talks while her children were having faith-based learning was amazing.

“The IMS has really brought Toby and I closer together as a married couple. After being together for 10 years it’s been a long time since we stopped and reflected on what we wanted from our relationship in the future and the role that God would play in this.

“We have had some beautiful conversations together over the last few days and I would absolutely recommend IMS to any Catholic couple. “It’s given us an amazing opportunity to reconnect.”

Main image: One hundred and eighty young people and families gathered in Cygnet, Tasmania for the 2021 Immaculata Mission School.