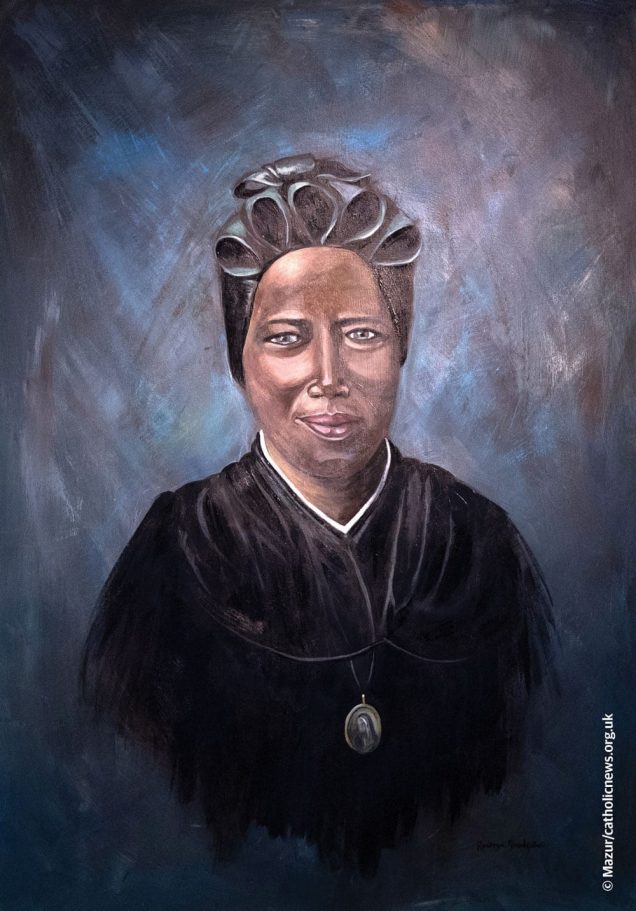 Kidnapped and sold into slavery as a child, St Josephine Bakhita is a model of Christian hope and a patron for all victims of modern slavery and human trafficking.

Born in the Darfur region of Sudan in 1869, she was only a young child when she was kidnapped by Arab slave traders.

The trauma of her abduction and subsequent slavery caused her to forget her birth name. She was instead known as Bakhita (‘lucky’).

She was bought and given away to a succession of owners, some of whom badly mistreated and tortured her – including one who scarred her with 114 deep skin cuts.

In 1883, she was sold to the Italian Vice Consul of Sudan, Callisto Legani, who took her to Italy and gave her to another family to work as a nanny.

When her mistress left Italy to visit Sudan, St Josephine Bakhita and the daughter to whom she was a nanny were placed in the care of the Canossian Daughters of Charity in Venice.

It was from the Canossian sisters that St Josephine Bakhita first learnt about Christianity. She later said that she had always known God in her heart but had not known who He was. She became a candidate for Baptism.

When her mistress returned to Italy to collect her, St Josephine Bakhita refused to leave the sisters.

The matter went to court and in 1889 it was ruled that that St Josephine Bakhita was legally free.

She opted to remain with the Canossian sisters. She was baptised and received Confirmation and her first Holy Communion from the Patriarch of Venice, Cardinal Giuseppe Sarto, who would later become Pope St Pius X. At her baptism, she took the names of Josephine, Margaret and Fortunata (Latin for the Arabic Bakhita).

She entered the Canossian novitiate and made her final religious profession in 1896.

Several years later she was transferred to the Canossian convent in the northern Italian city of Schio where for over 40 years she served her community through cooking, sewing, and as the convent’s portress. She also travelled and told her story to sisters who were preparing to serve in Africa.

St Josephine Bakhita became loved by the people of Schio.

During the Second World War locals thought her presence had protected the town when, despite the town being bombed, not one person living there died as a result.

Once, when asked how she would treat her captors if she were to meet them, she replied that she would kneel and kiss their hands because if it had not been for them, she would not know Jesus Christ.

She died surrounded by her religious sisters at the Canossian convent on February 8, 1947.

Her feast day – February 8 – has been designated as an annual world day of prayer and action against human trafficking.

She is the patron saint of human trafficking victims, and Sudan.