From wanting to be a homeschool mum, to embracing religious life: Sr Celine Marie’s journey to first vows 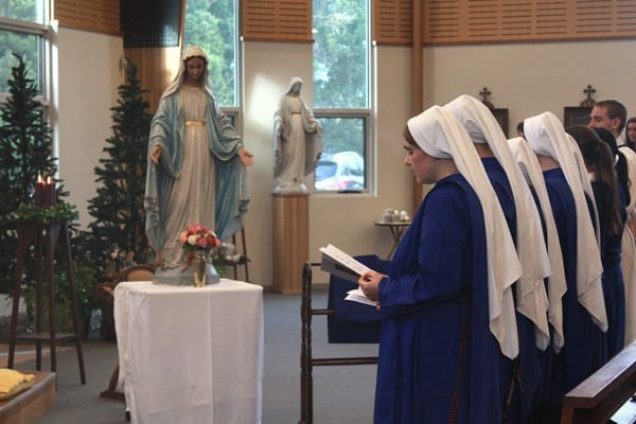 For Sr Celine Marie Doodeman, 24, who made her first profession of religious vows in December, the journey from desiring family life to consecrated life has been a long one.

Born the eldest of seven children in a Catholic family, Sr Celine Marie says her parents taught her how to pray, the importance of going to Mass, and of having a relationship with God.

“I’ve known and loved Jesus all my life. And I don’t think there’s ever been a time where I’ve gone away [from the faith] at all. Because people have conversion stories, and they have that moment when something happens, but I feel that for me, it’s always been just a journey of going deeper.”

Sr Celine Marie grew up familiar with different religious communities, and first met the Sisters of the Immaculata when she was 14. But she didn’t think religious life was for her.

At 19, she took the opportunity to travel to Krakow, Poland for World Youth Day with the Immaculata Community and discovered thirst for Eucharistic adoration.

“After World Youth Day something happened,” she said.

“We prayed together as a group, every day in adoration. When I came back from World Youth Day, I couldn’t do without adoration. And that’s all I wanted to do. That’s all I wanted to find. I couldn’t do without community. I had to go find young people with faith to be with … My life changed basically, and my heart also opened then to what God wanted rather than what I thought God wanted.”

During World Youth Day the pilgrims had an opportunity to pray with the relics of St Therese of Lisieux – a saint to whom Sr Celine Marie had always been close.

“We were in adoration with her relics … and I felt her say to me: ‘Take another look at religious life.’”

In 2017 she took part in a five-month mission school for young people run by the Sisters of the Immaculata in Tasmania, and put her vocational discernment on hold to be present to the program of prayer, formation, mission and community life.

At the end of the mission school, she didn’t want to leave but felt God was telling her to go home to New South Wales.

“I was pretty upset about that at the time, but I realise now that if I didn’t go home I would’ve stayed with the sisters, no problem, and been a missionary, but I would never have stepped out as a sister.”

During her six months at home, she took part in a lengthy process of applying for a ministry position. When she didn’t get the role, she emailed Mother Mary Therese Ramsden of the Sisters of the Immaculata to ask for prayers.

“And then she emailed back and then asked me if I would be open to doing a novena about whether I was meant to discern with them,” Sr Celine Marie said.

“At the end of the novena God really spoke to me and gave me a really clear sign that I was meant to step out.”

The sisters already had two other postulants joining them at the end of July, so two-and-half weeks after deciding to enter, Sr Celine Marie became a postulant.

Although the first few weeks were a “real adjustment”, she realised she was happy, peaceful and content.

“This is what I wanted to do with the rest of my life.”

She says religious life wasn’t what she expected, but that she feels so loved.

“I couldn’t stop telling people, when I’m writing letters to my family or anything, ‘I’m just so loved here. Don’t worry, I feel so loved. I’ve never felt so loved in my life.’ Just felt the grace and the peace,” she said.

Her title, which she received along with her religious name of Celine Marie, is ‘of the Little Way’ after St Therese of Lisieux.

Sr Celine Marie made her first profession at St Mary of the Cross Church in Ranelagh on December 8.

She says she “held it all together” during most of the ceremony, but when she went to kneel before the statue of Our Lady in thanksgiving she burst into tears.

“And people ask you: ‘Do you feel different?’ And yes, I do feel different but I don’t know how to explain it. I just feel so light and free, like a whole weight’s been lifted off.”

She says she feels so blessed to have received this vocation.

“I didn’t ever want it, but yet I think that makes me feel so much more blessed, because it’s not what I wanted, but God wanted to give me this gift. … He’s called me, he’s given me this vocation, He loves me. I love him.”

Main image: Sr Celine Marie (left) with other Sisters of the Immaculata at her first profession of religious vows.