The good sport: Priests on the playing field 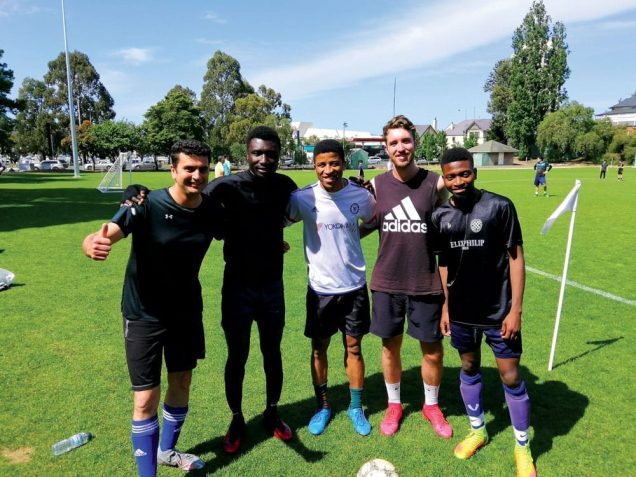 The health benefits and community connections that occur as a result of sports participation are widely known.

What is perhaps less well known is the number of Tasmanian priests who take to the playing fields on a regular basis as coaches, players and competitors.

From coaching soccer to lining up for a Catholic school staff netball team, or raising money on a charity cycle ride, here is a look at just of few of the Archdiocese of Hobart’s sporting priests (and one seminarian) in action.

Fr Fidelis Udousoro, 30, has played soccer since he was a boy growing up in Nigeria. Now he is based at Hobart’s Cathedral parish and on Saturdays he can be found on the soccer fields of Sandy Bay, playing in a social competition with a group of multi-national university students.

“In Nigeria, football [soccer] is a major sport but you get selected to play there only if you are really good. Here, where soccer is not as popular, they assume I must be really good,” Fr Fidelis said with a laugh.

“It is good to do something different to get refreshed and just be a young man and be happy. I really love it.”

“It’s a chance to get to know the locals and keep fit. It is also an opportunity to provide help, support and friendship to internationals new to the state.”

Fr Fidelis plays on the right wing in soccer sessions lasting up to three hours at a time. It is also a chance to connect with newly-arrived Catholics.

“Because some players know me as a Catholic priest, and they call out to me on the pitch, ‘Father! Father!’ and that draws attention,” Fr Fidelis said.

“Then I invite them to the church. One time, three couples started coming to the church as a result. That is really good.”

Bridgewater-Brighton Parish Administrator Fr Leodigario Zenarosa MLCC has played in Australian-Filipino basketball teams while in Tasmania, but has also learned the delights of netball, as part of a staff team representing St Paul’s Catholic School at Bridgewater.

He also does a lot of running and boxing, and has taken part in an online push-up challenge, in aid of promoting good mental health.

“I was playing basketball and netball, and we won the championship [two years ago] – Australian Filipino basketball at Warrane,” Fr Leo said.

“Also I played a tournament in Bellerive in netball. It’s a serious sport. In netball I played goal shooter or wing attack, but mainly goal shooter with the Catholic school teachers at St Paul’s.

“When they [heard] that I am a little bit sporty, they contacted me.”

“They taught me to play. In the Philippines we love basketball and boxing. But I easily learned netball because I am sports-minded. Because of the basketball, I know how to shoot the ball.

“I receive special player of the day because they were amazed at how I played at the last tournament.

“I do conditioning and running because I am short and I need strong muscles, strong physique. Australian people are really big. I am playing with 6ft2-6ft 5 people. I am only 5ft5.”

Fr Leo, 41, explained that due to COVID-19 restrictions, he was now concentrating on running and boxing. He does his boxing training at the nearby PCYC.

“Before I play basketball here [at the PCYC]. Now I box here,” he said.

“It is so I can have a connection with the community. Many people know that I am a priest, so they don’t hit me very hard!”

Fr Chathura Silva was known as a sports enthusiast during his childhood in Sri Lanka and his seminarian days in Victoria, and that is still the case now, as the Launceston Parish’s assistant priest.

Fr Chathura, 29, was invited to join a social basketball team after taking part in a St Patrick’s College retreat.

BASKETBALL: Launceston Parish Assistant Priest Fr Chathura Silva is a sports enthusiast who has turned his hand to basketball.

“I joined a basketball team at the YMCA [in Kings Meadows],” he said.

“We play in the men’s division. It is a social thing. I joined half way through the season.

“These students are in year 12 from St Pat’s and they play for a club. I am just one of the players. They all play for fun.

“While I like soccer and cricket, basketball is my favourite sport and I have played ever since I was a kid.”

“They play a fair game. It is just for fun and I enjoy it. I look forward to it. It is a group of friends,” he said. “It is for health, for fitness, and as a social thing.”

Fr Paschal Okpon, currently back in Nigeria, also enjoys sport and was an assistant coach for a Devonport under-16s side while in the Mersey-Leven Parish.