A lifelong journey of faith 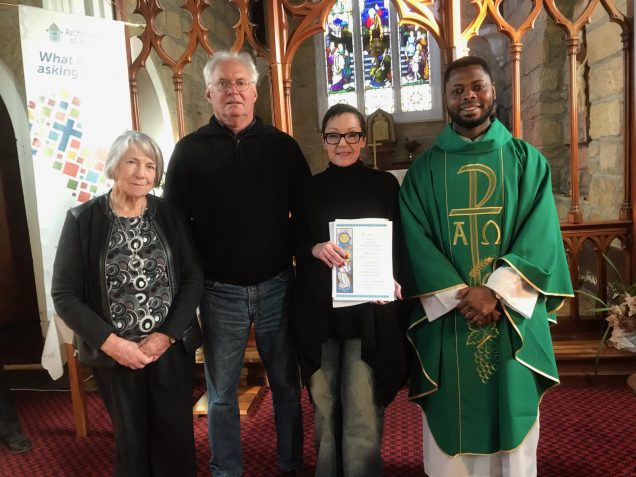 Such was Rebecca Loren’s attraction to Catholicism that as a child she would write ‘Catholic’ on forms when they asked about her religion – to the great annoyance of her mother who would have to have the forms redone.

However, it wasn’t until October last year that Rebecca, 55, would officially become a Catholic at St Pauls Church in Oatlands.

Raised in a non-religious household, with a lapsed Catholic father and an anti-religious mother, Rebecca was baptised in the Church of England as a baby. Some of her earliest memories are of sneaking to the house of her neighbours, an Italian Catholic family, for prayers.

“I was very, very young, only about three years old … I always thought it was very special and very peaceful when they were praying,” she said.

That feeling of peace, and the witness of resilience would continue to make an impact on Rebecca throughout her life.

Born in Adelaide, Rebecca spent much of her adult life travelling – living in England, France, New Zealand and Brisbane before settling in Tasmania. However, wherever she went, she was drawn to Catholic friends, and even found comfort in praying the rosary.

“My friend’s mother was a devout Catholic and I have her rosary. When she was ill with cancer, I took it to Europe and prayed it. I felt like a complete fraud but every time I sat with it, it felt very peaceful – and also kept the tourists away,” she said.

The rosary continues to be her favourite prayer. The ultimate catalyst for Rebecca to join the Catholic Church was the passing of her mother in 2016.

Since becoming Catholic, Rebecca has been surprised at the sense of camaraderie and community.

“I like the solidarity and the support especially in the parish,” she said.

“For some reason I had not even thought about that side of it. There is just a really nice extra layer of support.”

She took on St Mary of the Cross MacKillop as her Confirmation saint.

“I had lived in a lot of the places that she had,” Rebecca said.

When asked about her experience of entering the Church after nearly 50 years of searching, Rebecca said it was “a bit surreal”.

“In some ways I thought; ‘Oh my goodness am I being a bit of a fool?’ But I am very, very happy and relieved that I did it,” she said.