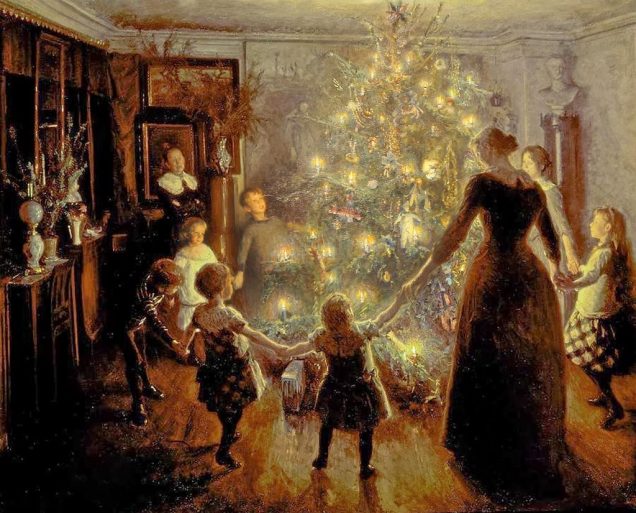 Sacrament Matters by Dr Christine Wood, Director of the Office of Evangelisation and Catechesis

Christmas traditions at home aid us to enter into the mystery of Christ’s birth: carolling, decorations, the Christmas crib and tree, presents, and almsgiving.

Although preceding Christmas, the Advent wreath is erected in the home on the First Sunday of Advent. Advent means ‘coming.’ Each Sunday a new candle is lit so that the growing brightness anticipates the coming of the Lord of light. On Gaudete Sunday, the solemnity of Advent (symbolised by purple candles) gives way to rejoicing (rose candle) at what is coming in a few days at Christmas. Gaudete Sunday can be celebrated with sugary mince pies or other delights. Family evening prayers around the wreath, with the intention of readying our hearts for the coming of Christ, can be followed by the singing of carols (Gaudete Sunday onwards), and nibbling on traditional spicy biscuits and other snacks.

Christmas trees (representing Christ) and decorations are traditionally erected on Christmas Eve, but at a stretch no earlier than December 21st so as not to diminish the Advent season. We’ve all experienced the commercialisation of Christmas with decorations erected in stores as early as October. This misses the meaning of Christmas. We are a people who eagerly await Christ’s coming, and in fact we need time to prepare spiritually. Thus, we have Advent. On the flip side, for Catholics, Christmas celebrations extend for 12 days until the Feast of the Epiphany (January 6th) when decorations come down.

The idea of the Christmas crib was popularised by St. Francis of Assisi who erected one in the town square to aid the devotion of the people in appreciating what God had done for them in becoming a little child. The crib can be erected at home on Gaudete Sunday, but without the infant Jesus who isn’t placed in the manger until after Christmas Midnight Mass or on Christmas day. The wise men are placed at a distance, and journey closer until they reach the crib on the Feast of the Epiphany, which celebrates Christ’s appearance to the gentiles. The crib becomes a place of prayerful devotion for the family.

Traditionally, donations to the family’s favourite charity are made on Christmas Eve. We exchange presents at Christmas as a sign of Christ’s love: he became poor like us in order to make us rich like him. Likewise, Christ desires us to help the poor, hungry, sick, and lonely. Consider inviting someone to join your Christmas dinner who would otherwise be alone.

Christmas is the most wonderful time of the year: it’s a time to rejoice in Christ’s coming to dwell among us. Let’s spread the cheer!