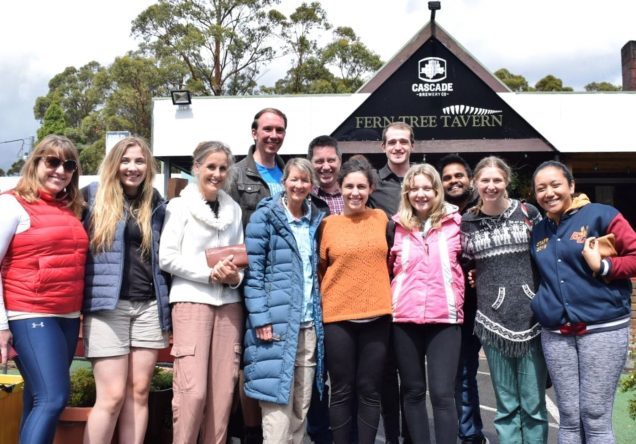 The Made For Each Other (M4EO) Summer School, hosted by the Archdiocese of Hobart, is an opportunity for young adults (18-35 yrs) to explore the Catholic Church’s unique message on love, relationships, marriage and the family. The 2021 Summer School will be the third time that the Summer School has been held in Tasmania.

Over the six days, the Summer School will be unpack the Church’s teachings on relationships, sexuality and marriage with a special emphasis on the theology of the body and other related work by St John Paul II. This event is an immersive formation experience for all attendees, and is delivered in a faith-filled and friendly environment. The Summer School includes a lecture component with group discussion, workshops, daily Mass, prayer, reflection, field trips, bush walking and social events.

The 2021 programme will also provide a day of professional development for teachers and those who work in youth ministry. There will also be an opportunity for youth (15-18 yrs) to participate in a youth program on Day 4 of the Summer School.

Key details of Made for Each Other (M4EO) Summer School:

Archbishop Porteous was ordained a priest in 1974 and a Bishop in 2003 for the Archdiocese of Sydney. In September 2013 he was installed as Archbishop of Hobart.

During his time as Archbishop of Hobart, he has been a forthright defender of the Church’s teaching on marriage and the family. The Made for Each Other Summer School is one of his initiatives to promote a culture of marriage in Tasmania.

Anna is a graduate in theology from the Melbourne College of Divinity. She has worked as a researcher for the Bioethics Centre at St Vincent’s Hospital in Melbourne.

Anna is currently a regular contributor to The Catholic Weekly and has written extensively for other Catholic publications on topics such as Theology of the Body and the Feminine Genius.

Matthew’s research interests have covered theology’s engagement with politics, migration, digital culture, pop culture, prayer and the virtues. His writing has appeared in both scholarly and popular outlets in Australia, the US, the UK and Europe. He is the author of two books; his most recent being Redeeming Flesh: The Way of the Cross with Zombie Jesus. Matthew is also a blogger and blogs at AwkwardAsianTheologian.com.

Clare Mittermayer qualified as a lawyer before leaving to work for the Church. She received formation for five years with a focus on the teaching of St John Paul II and was then as a religious sister for six years during which she did a Masters in Counselling and another in Clinical Psychology. She then moved to Tasmania where she met her husband and started a family. Her speciality is using her training in psychology and spiritual theology to help people realise their dignity, deepen their spiritual life and fulfil their potential.

Martin and his wife Loretta have been married for 26 years and have four children, Ella, Marcus, Louis and Lucia.

Ben Smith has held roles in the Catholic Church at a diocesan and national level, in the area of life, marriage and family for the last six years. In these roles, he has been actively engaged in ethical debates concerning hot-button issues such as euthanasia and same-sex marriage.

He completed a Graduate Certificate in Theological Studies (Marriage and Family) at the John Paul II Institute in Melbourne in 2017. He has delivered lectures on Theology of the Body to seminarians and married couples in the Parramatta Diocese. Before he worked for the Church he held a variety of engineering, business development and management positions in the corporate, government and higher education sectors since 1997. He also has tertiary qualifications in Applied Physics and Management from Macquarie University.

Veronica Smallhorn was born and raised in Canberra. Her first fictional novel, A Channel of Your Peace, was published this year by Full Quiver Publishing. In this novel, Veronica weaves the Church’s teachings on sexuality and marriage into a compelling narrative that maps the journey of two young people going through the ups and downs of their lives, as they move from suburban Australia to the busy streets of Mexico and back again, and ultimately into each other’s arms.

She has been married to Pablo since 2005 and lived in his home county of Mexico for three years. They have since moved back to Canberra. Veronica is a home-schooling mum, who enjoys reading, photography and spending time with her three children and her husband.

The new additions to the M4EO 2021 program include a day dedicated to exploring Catholic Social Teaching through the lens of the human person, a teacher/youth leader stream on Saturday, January 23 and a youth stream for those under 18 on Sunday, January 24.

“But the summer school isn’t just this week-long lecture series on Theology of Body. It’s going up to Mount Wellington. It’s seeing the beauty of God and his creation with your own eyes.”

“…it was really special for me just sitting around with all these other young people that share this philosophy with us, that share this faith… And it was quite inspiring that we’re not alone and that there’s a real movement of truth-seeking, loving people that are really trying to live God’s word throughout their lives and to bring that to others in the most loving way and to share that with one another just reinforces everything that you’ve been taught, solidifies it.”

“It’s so worthwhile and there’s so much spiritual and personal growth going through it all. It sounds so cheesy, it’s made me a better person. It really has.”

Registration covers meals and general costs for running the Summer School. Accommodation and breakfast are not included (see below for some accommodation options):

Register for the Made for Each Other Summer School for either the full program or for individual days.

Participants will need to organise their own accommodation arrangements for the Summer School. There are inner-city accommodation options that are in easy walking distance to St Mary’s Cathedral:

Motel Mayfair on Cavell: Those who attended the conference last year will be familiar with this motel, which is not overly expensive. Located in West Hobart, this is only a 15-minute walk from St Mary’s Cathedral. Just need to be prepared to walk up a hill.

Harrington 102: Located within a five-minute walk to St Mary’s Cathedral. They have a few twin share options with or without an ensuite.

Montacute Boutique Bunkhouse: Good for those looking for a cheaper accommodation option, this boutique bunkhouse is located in the touristy part of Hobart, and is a 20-minute walk to St Mary’s Cathedral.

For more information about the M4EO Summer School please contact Ben Smith, Director Office of Life, Marriage & Family or on 0410 691 371.