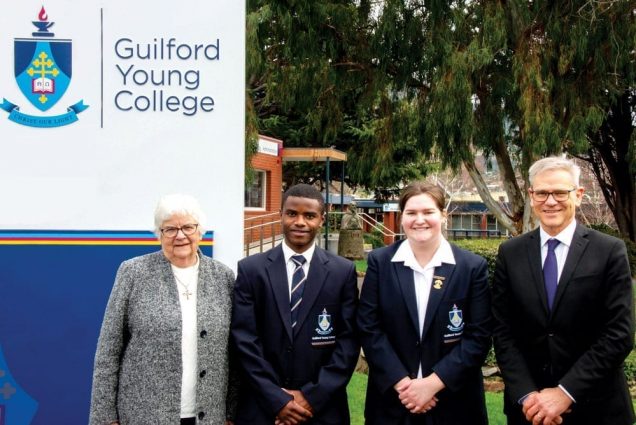 Guilford Young College, which has played a pivotal role in Catholic education in the south of the state, is celebrating its 25th anniversary.

It drew on the traditions of its founding religious congregations – the Sisters of Charity, the Dominican Sisters, the Sisters of St Joseph of the Sacred Heart, the Christian Brothers and the Salesians – and took inspiration from the Catholic leader after whom it is named, Archbishop Sir Guilford Young (1916-1988).

First principal Sr Pamela Davis OP described Archbishop Young as a visionary who was committed to ensuring that a Catholic education was available from kindergarten through to year 12.

“He believed that all parents had a right to this kind of education for their children, whether they were wealthy, or they were struggling at the other end of the scale,” Sr Pamela said.

“The college motto was taken from part of the motto of Archbishop Young himself. The gist of that was ‘Christ Our Light’, and that Jesus Christ was the cornerstone of this education that we wanted to provide.

“Students and their parents knew that they would be in a community that taught them respect and honesty and compassion.”

Sr Pamela acknowledged that there were tough times in the planning and implementation of the college: “We can’t say that it all went swimmingly from the first day, because no one would believe that. [But] from the early years there were great signs that it could be a very good college.

“Twenty-five years later, I’m very proud of that college. The other principals, Mrs Bobby Court and Mr Craig Deayton, have done an excellent job and continued to improve on what was there in the past.”

Current principal Craig Deayton said the college was proudly marking 25 years of achievements while looking forward with faith to an exciting future.

COVID-19 has impacted celebrations but the college is still marking the milestone with a commemorative medallion for staff and students; pre-recorded messages from some notable alumni; and a question-and-answer session with past and present principals Sr Pamela, Mrs Court and Mr Deayton.

“The college lives up to the wider vision of Catholic education in Australia, but also the particular vision of Archbishop Sir Guilford Young in championing the faith in Tasmania and also championing education and opportunity for students,” Mr Deayton said.

“In terms of the restructuring of Catholic education in Hobart, this is an enormously exciting time and Guilford Young College is going to be working closely with our partner schools and colleges in providing years 11 and 12 to everyone across the greater Hobart area, which of course has grown much larger than it was when Guilford Young College was founded.”