Searching for old copies and clippings of the Standard Newspaper 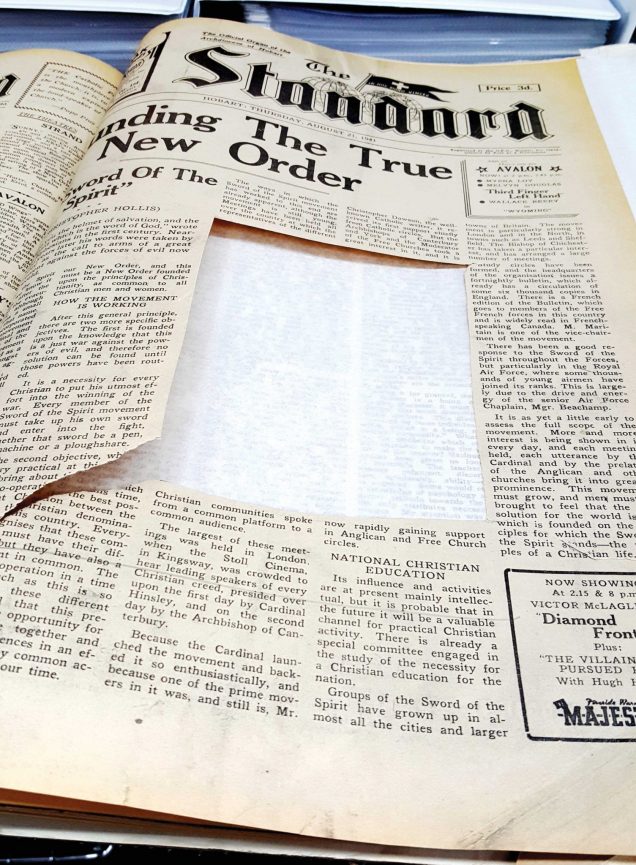 Journalism is often called the first draft of history. This is certainly true for the Church in Tasmania, where a tradition of Catholic newspapers offer a good record of what happened from 1867 until the present. But there are some gaps that need to be filled.

The Archdiocese of Hobart Archives and Heritage Collection is looking to digitise some of its rare newspapers in the near future, starting with the collection from the late 1930s and 1940s.

“Partly because of paper shortages during the war, and improper care afterwards, this is one of the weakest parts of our collection. We want to preserve it first,” said archives officer Dr Nick Brodie.

“We want to ask Tasmanians to check their garages and attics. We have lots of gaps in these years. For instance, less than 11 partial issues of the Standard survive from 1939. Perhaps 29 issues are missing for 1940. Many of these are short by several pages.”

Dr Brodie said people liked to cut out stories and photographs and recipes, so many of the surviving newspapers have big rectangular holes in them.

“Ironically, it is these clippings that might now be the only parts of other issues to survive, perhaps tucked inside old recipe books.

“So we are putting out a call to see if anyone might have old copies or clippings from the Standard between 1938 and 1949. We are also interested in earlier materials from the other Catholic papers.”

Dr Brodie encouraged people who might find something to call the Archives and Heritage Collection on (03) 6231 4740 during office hours between Monday and Thursday.