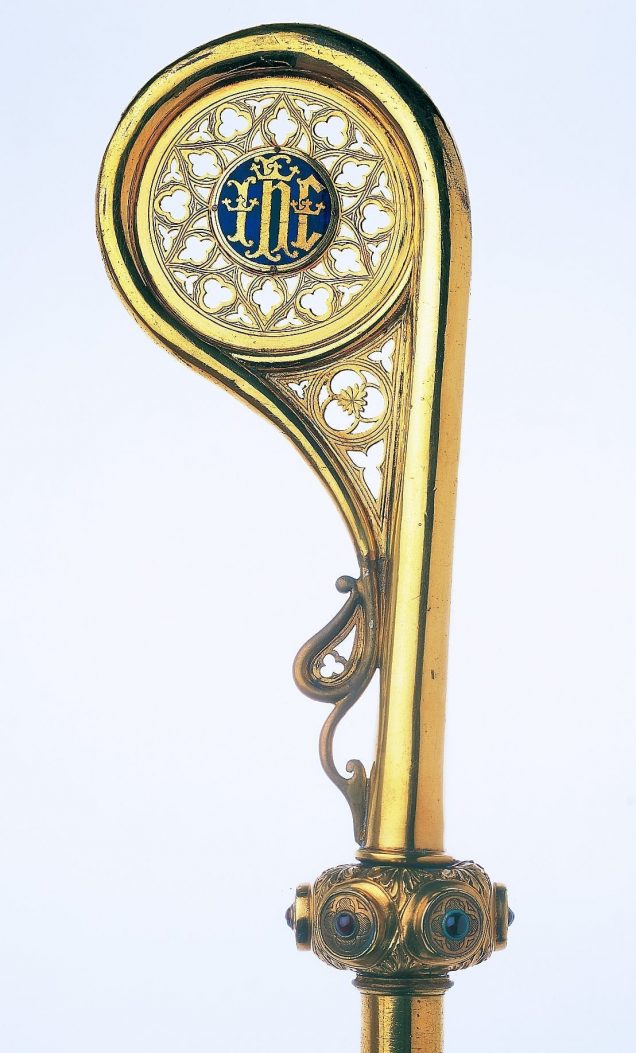 During October 1842 the great English designer Pugin was hard at work on the design of episcopal regalia for his close friend Fr William Willson of Nottingham. On Thursday 6 October he noted to a priest friend, Dr Daniel Rock, that ‘I leave here (Alton) on Monday for Pontefract, Newcastle, Carlisle and many other places, and till then am working early and late for various things, especially all the episcopal ornaments in the true style for Mr Willson’s consecration as Bishop of Hobart Town’. Pugin had been pressed to complete his designs following Willson’s belated acceptance of the mitre. As late as 15 August, Archbishop Polding of Sydney had written to Rome pleading for Willson to be appointed for Hobart Town, stressing that Willson was now prepared to accept in obedience what he had declined earlier in the year.

The essential items of episcopal regalia were rushed through production by John Hardman & Co., the Birmingham firm that made all Pugin’s metalwork, with just a day to spare before the ordination date of Friday, 28 October, 1842. Pugin gave the pectoral cross; Thomas Close and his wife—dear friends of Willson—gave his mitre and ring; and the crozier (pictured) was the gift of John Talbot, sixteenth Earl of Shrewsbury. The Earl had already contributed a huge sum towards the erection of Fr Willson’s St Barnabas’ Church (later Cathedral), Nottingham, and, as Pugin’s munificent patron, would be the benefactor of many other splendid English Catholic churches. The crozier was—characteristically for Shrewsbury—of gilt copper, albeit decorated with enamel and garnets. Noted English silver authority Shirley Bury has observed that: ‘The Earl apparently developed an almost pathological dislike of paying for silverwork, which Pugin was forced to accept. Shrewsbury had to economise in every possible way in order to spread his bounty over as many projects as he could. Expenditure on precious metals seemed to him to be unnecessary and even wasteful when the appearance of a cheaper substitute was the same.’

In 1994 this precious belonging of our first Bishop was taken back to England for inclusion in the Victoria and Albert Museum’s blockbuster exhibition, ‘Pugin: A Gothic Passion’. Before the crozier was returned to Hobart, a missing tail-piece to its head was restored at the expense of the Archdiocese of Birmingham as a gesture of solidarity with the families of the 1996 Port Arthur massacred victims.