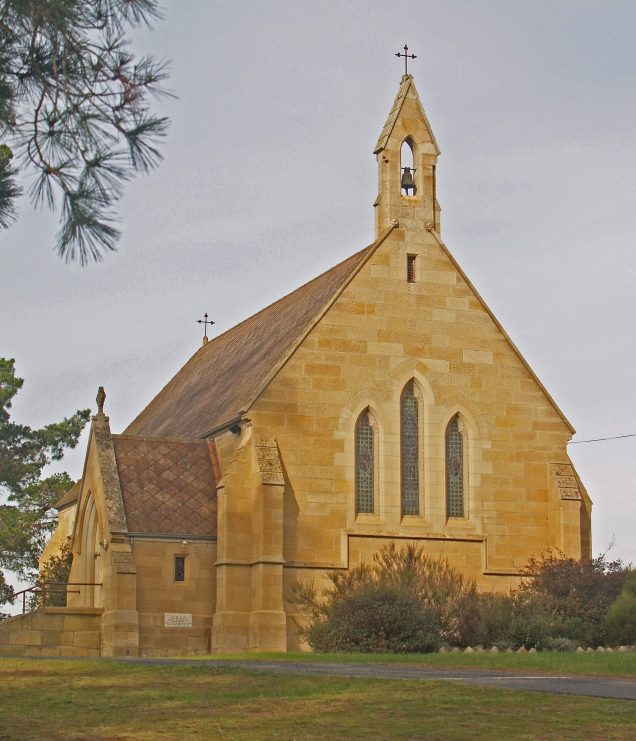 On the outskirts of Pontville, just north of Brighton, stands the beautifully-proportioned St Matthew’s Church by the great Tasmanian architect Henry Hunter. Constructed from local sandstone, it was opened on 11 September 1867, its noble appearance and elegant detail nowadays giving no indication of the disaster which befell it on 5 September 1927, just a few days before planned sixtieth anniversary celebrations. Early that morning a local resident noticed the building in flames. The fire was so fierce that all attempts to enter the church proved impossible and its entire contents were destroyed, only the walls remaining standing. Amongst the losses were several stained glass windows installed just a few years previously.

Given the total destruction of the building’s roof and contents under suspicious circumstances, it is little short of remarkable that it was completely reconstructed, refurnished and re-opened three weeks before the first anniversary of the conflagration. This, as noted by Archbishop Barry on the occasion of its re-opening, was ‘due to the cooperation of all the people of the district irrespective of religion and to the assistance of friends from outside.’ As he noted, ‘the building was a complete ruin’ and ‘its restoration seemed impossible’.

Those visiting St Matthew’s can still admire its stained glass windows which are exactly the same as the ones destroyed in 1927. This is because the windows are by the well-known Melbourne firm of Brooks Robinson & Co., the company responsible for a large number of commissions for stained glass throughout the Archdiocese of Hobart during the first half of the twentieth century. Brooks Robinsons were able to re-use the cartoons (the term for the full-size designs) from which the original windows were made to produce a replacement set. Regrettably, other significant furnishings, like the wooden altar by the architect Henry Hunter with its painted and gilded detail, were lost forever. All that remains from before the fire is the sandstone sacrarium, copied by Hunter from a Pugin-designed original brought out from England by Bishop Willson in 1844.