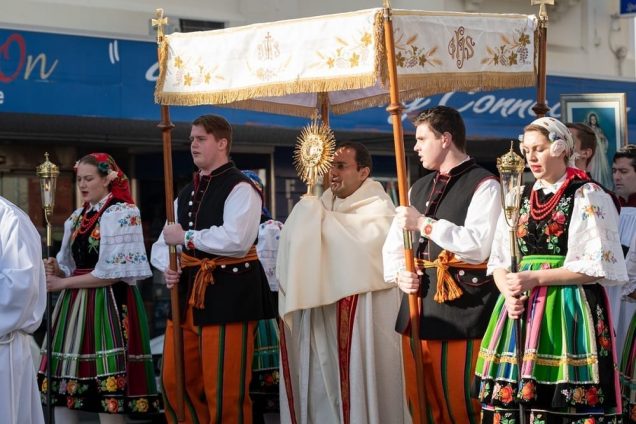 In a modern society which has conditioned us to believe that religion is a private matter, walking down the street in a religious procession in Hobart might seem a bit curious or even cringe worthy. But as Pope St John Paul II told the youth gathered in Denver for World Youth Day, “Do not be afraid to take Christ to the streets”.

Since medieval times Catholics have seen processions, especially of the Blessed Sacrament, as a means to express their appreciation of the gift of Christ’s body given to the Church in the Mass. Certainly by no means an isolated example, the 1928 Eucharistic Congress in Sydney which took place in still strongly sectarian Australia, witnessed a procession of more than 25000 before a crowd of over half a million. Describing the events for the Melbourne Herald, Frank Russell wrote:

“To anyone with the least spark of imagination this event was charged with a significance that must appeal ‘to all, Protestant and Catholic. There passed in slow procession not men, but embodied ideals born humbly 2000 years ago, strengthened by difficulty, ennobled by danger; ideals so powerful that they have succeeded in placing even human nature under obedience. Here, visibly proven, was the fulfilment of the command given at a time when a few poor, despised and ignorant fishermen were the only available agents to execute it—a command to carry to all peoples, nations and languages the message which a village carpenter died in uttering.”

In 2018, bishops from across Australia gathered at St Patrick’s Church in Sydney’s “Rocks” precinct to celebrate the 200th anniversary of the preservation of the Blessed Sacrament in Australia. Sydney Archbishop Anthony Fisher OP offered that the site of St Patrick’s could be considered the birthplace of the Catholic Church in Australia from where “the laity raised an irrepressible cry for the sacraments.”

But the anniversary also celebrates the faith and Eucharistic devotion of priestless people in the early colony who for two years after Governor Macquarie had the Rome mandated Fr Jeremiah O’Flynn arrested and shipped back home, attended daily to worship until the arrival of Fathers Therry and Conolly.

At Corpus Christi the Church does not only celebrate the Eucharist but solemnly bears it in procession, publicly proclaiming that the Sacrifice of Christ is for the salvation of the whole world. Public displays of faith are an important message when political pressure again seeks to restrict the religious expression of Catholics in Australia. So let us not be afraid to take a walk with Christ.