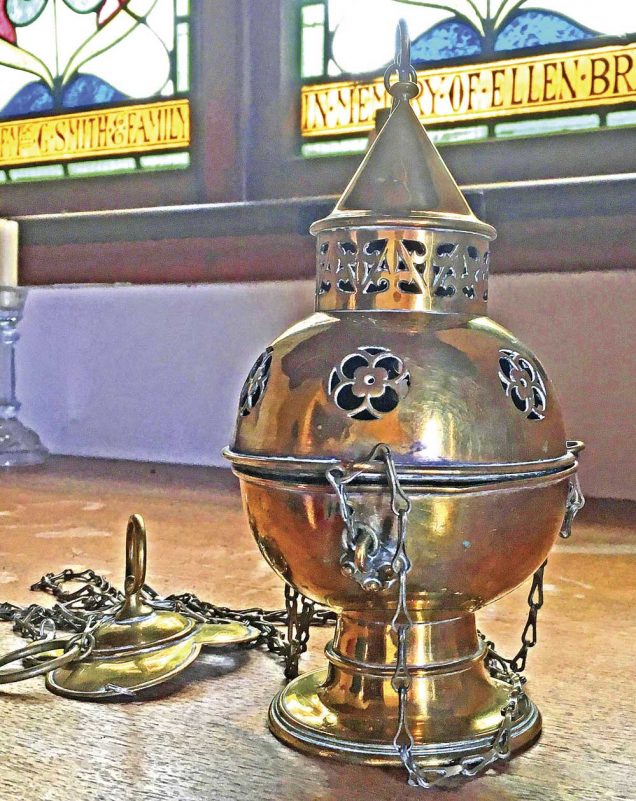 From 1857 the first permanent pastor of Campbell Town was Fr John Fitzgerald (1830–65), the son of a pioneer Catholic family and the first Tasmanian-born priest to work on the Island. He was supplied by Bishop Willson with splendid Pugin-designed vestments which had been ordered, along with metalwork, when the bishop and newly-ordained Fr Fitzgerald visited Hardmans and Mesdames Powell and Brown’s vestment establishment in Birmingham on 4 and 7 September 1854. Amongst the metalwork treasures was this unique and significant thurible, not duplicated in any of Pugin’s English cathedrals, churches, chapels and colleges. Priests stationed at Campbell Town over the decades served settlements in the Fingal valley, including Avoca, Fingal, and eventually Mangana and Mathinna, as well as Ross to the south and Swansea on the East Coast. As a result, a number of Pugin-designed items were transferred to other churches, including this thurible.

There are several details of the thurible’s design which are unique to Pugin’s oeuvre and appear on other of his metalwork products. The most distinctive such element is the pierced quatrefoil enclosing a quatrefoil flower of which there are four on the hemispherical upper part of the vessel. This detail is to be found, with insignificant variations on several of Pugin’s English sacrying bells, a typical example being one in St Chad’s Cathedral, Birmingham. An entry for this thurible is not be found amongst Bishop Willson’s purchases as recorded in the Hardman Metalwork Day Books. But the clue to its provenance is to be found in Fr Thomas Kelsh’s 1882 biography of Willson. He wrote that shortly after the bishop returned from a recuperative trip to England, a reception was arranged for him on 2 February 1855. After the usual speeches were made, Willson retired and his Vicar-General, Fr William Hall, exhibited a chalice purchased with the gold specimens that had been presented to the bishop as a farewell gift in January 1853. He added: ‘Several other objects were also exhibited, including a valuable cameo presented by Pope Pius IX, and a large quantity of Church plate, candlesticks, and other articles for the service of the altar.’ No Hardman Day Book entry exists for these latter items because they came to Tasmania under a unique ‘sale or return’ arrangement between John Hardman and Willson. Hardman was well aware of the difficulty of Willson’s circumstances and his consequent problems in making outright purchases to meet his diocesan needs. As Willson explained, ‘My dear Friend Mr Hardman asked me if he sent things on his own risk, I would use my endeavour to dispose of them—and I of course said at once that I would. I stated to Mr Hardman our Poverty—fewness, comparatively of our people. I was surprised at the large amount of things sent.’ I can confidently conclude that our thurible was one of several supplied to Willson for ‘sale or return’ by Hardman late in 1854.