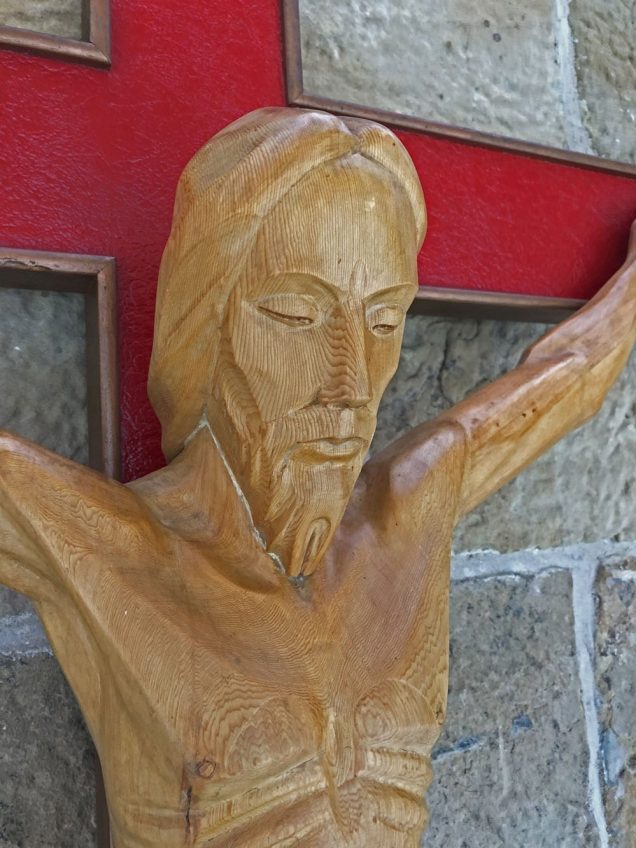 The two decades after World War Two were a period of great creativity in the field of liturgical art, with works by eminent Australian artists such as the Austrian-born woodcarver Leopoldine Mimovich (1920–) and the Czech-born metalworker Voitre Marek (1919–99) being sought for Tasmanian churches. In the person of Alan Gelston (1929–64) the Church had one of Australia’s leading liturgical artists whose work stands comparison with the best European ecclesiastical art of the period. In a brief working life cut tragically short he produced a number of outstanding works of liturgical art in various media, including painted Stations of the Cross, carved wooden crucifixes, metal sculptures and statues.

Alan was born in Westbury and studied at the School of Art in Hobart under the noted artist Jack Carington Smith. His work was encouraged and promoted by Archbishop Guilford Young (1916–88) who, in undertaking a sweeping re-ordering of the interior of St Mary’s Cathedral in the late 1950s, commissioned him to carve a crucifix to replace one by Pugin which had been in the building since 1866. It was installed in 1961 as part of a new suite of liturgical furnishings which included a high altar by Tom Bass (1916–2010) of Sydney and a set of wooden furniture by the Melbourne art furniture-maker Schulim Krimper (1893–1971). The dignity and excellent composition of Gelston’s Huon pine corpus are typical of his oeuvre. Following the 2015 installation in the Cathedral of the 1925 hanging Calvary Group by the English architect Frank Howard, the Gelston crucifix was relocated in the passage between the Cathedral Centre and the sacristy.

Paradoxically, Alan Gelston’s most visible work is not ecclesiastical, being installed high above the main entrance to Parliament House, Hobart. He was commissioned c.1960 to carve the Royal Coat of Arms in sandstone, his selection for the work being an acknowledgement of his well-earned reputation as an artist of exceptional ability.