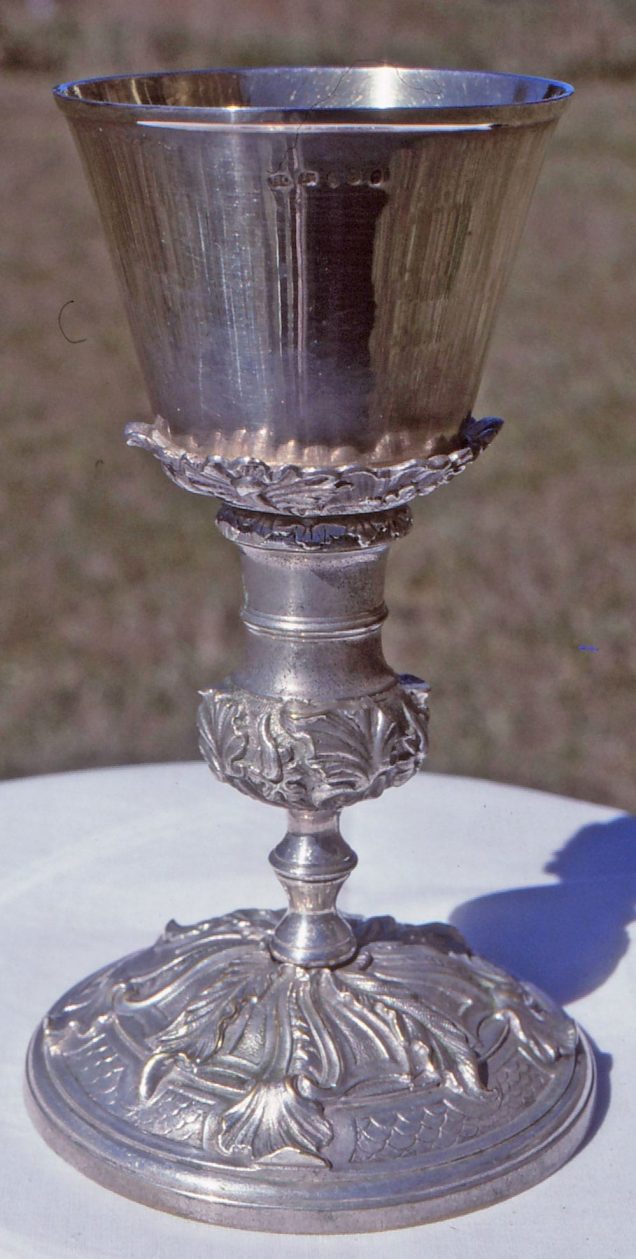 St Patrick’s Church, Blessington, opened in January 1919 and closed around twenty years ago, was a veritable treasure trove of hand-me-down items provided by parishes in the north of Tasmania. Thankfully, almost all have been preserved for posterity, including a historic English chalice over two and a quarter centuries old. With a little educated guesswork it is possible to reconstruct its history.

The chalice is Georgian in style and was manufactured in London in 1793–4 by a silversmith named Henry Chawner who had been established in his profession for less than a decade, having registered his maker’s mark ‘HC’ with the London Assay Office in 1786. We know this because all silver objects manufactured in Britain have been required by law to be punched with certain marks which denote the purity of the silver, the date of manufacture, the payment of duty and the manufacturer. Of plain design, with pleasant proportions and good balance, the chalice has a bowl of silver and a body of humbler material, probably brass, silver-plated. This has long been a common practice in the production of affordable altar vessels.

It would have been in use for nearly forty years in England before being brought to Tasmania in 1835, almost certainly by the Benedictine monk John Bede Polding, first Australian Catholic Bishop and father of the Australian hierarchy. Perhaps the chalice had come from his own monastery, Downside Priory, in Somerset. Polding called in to Hobart on his way to take up his pioneering appointment in Sydney, a diocese which at the time covered the whole of Australia, and commissioned Fr Ambrose Cotham, a fellow Benedictine monk who had accompanied him on the voyage from England, to assist the sole local pastor Fr Philip Connolly.

The historic Chawner chalice was almost certainly taken up to the newly-established Launceston mission in 1838 by its first permanent pastor Fr Cotham and, having moved locations several times over the past couple of centuries, now remains safe for posterity in the Archdiocese of Hobart Archives and Heritage Collection.