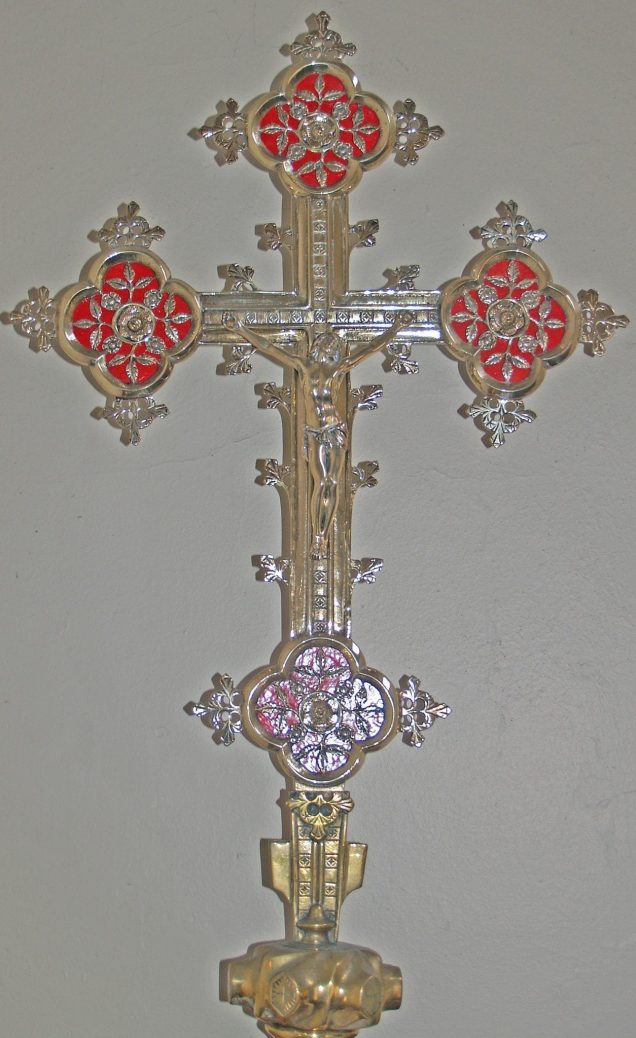 Amongst the furnishings purchased in 1843 for his episcopal seat of Hobart Town by William Willson, our first bishop, was a processional cross, the head of which is depicted.

It is one of at least nine which were manufactured by the Birmingham firm of John Hardman & Co. between 1839 and 1852 to an interesting hybrid design by Augustus Pugin, Willson’s extraordinarily talented architect friend, and built around a cross and figure cast from an early post-medieval exemplar he had acquired on the Continent.

Our processional cross arrived in Hobart with Bishop Willson on 14 May 1844 aboard the 560 ton barque Bella Marina, which was loaded to the gunwales with all the requisites to meet the needs—literally from cradle to grave—of Willson’s flock in his fledgling diocese, a flock comprising 3,000 convicts and 2,000 free Catholics in scattered settlements and penal institutions across the island. Addressing his clergy in October 1844, Willson stated:

‘I …  procured not less than 40 sets of vestments—linen of every description for several churches—such as albs, surplices, amices, altar cloths, chalice linen etc. common cloths … crosses, chalices, ciboriums, pyxes, holy oils stocks … a portable altar for use of the Bishop when travelling—and in order to introduce the proper church style in this distant land, I also procured a font rightly constructed and fitted which will serve as a model for all other churches, also stone piscinas, stone crosses, models of churches constructed on proper scales all by the great restorer of Church architecture and church furniture Mr Pugin, together with a variety of things which I hope will tend & promote God’s glory and your salvation.’

As is not uncommon, many processional crosses have suffered damage through being dropped by inattentive altar servers, and ours is no exception. Over more than 160 years it had lost the two foliated terminations at the extremities of its cross arm. In 2002 Melbourne master silversmith F.J. Rocca cast identical copies from a remaining termination at the top of the cross and seamlessly attached them, thus restoring the integrity of this historic metalwork treasure.