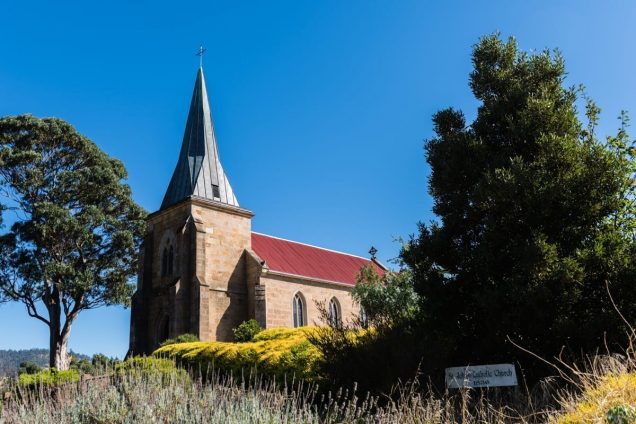 In its setting beyond the historic 1825 bridge spanning the Coal River, St John the Evangelist Church in the hugely popular tourist destination of Richmond can justly claim the title of Tasmania’s most visited and photographed church. It also has the distinction of being the oldest continuously-used Catholic church in Australia, having been opened on 31 December 1837.

The roots of St John’s Church can be traced back to Australia’s first Catholic bishop, John Bede Polding OSB (1794–1877), who visited Van Diemen’s Land—as Tasmania was then known—in August 1835 on route to taking up his posting in Sydney. Before leaving, Polding travelled to Richmond where he blessed the foundation stone for a new church, making this the first formal act of an Australian Catholic bishop, and left plans for the building by the Bath architect Henry Edmund Goodridge (c.1800–63). This small rectangular box served the community well for over twenty years until its pastor Fr William Dunne, having just erected the charming St Patrick’s, Colebrook, from plans by the great English architect Pugin (1812–52), decided in 1858 to enlarge it using elements from another Pugin design by adding a chancel, sacristy and steeple. The old church became the nave of the augmented building which was opened on 15 February 1859. In the hands of the local supervising architect Frederick Thomas (1817–85), Pugin’s elegant details lost a little in the process of being grafted onto Goodridge’s simple box, but the resulting ensemble has delighted locals and visitors alike for over 160 years.

By 1880 the spire, a wooden structure, had developed a dangerous lean. Whether it fell down or was dismantled is not known, but it was replaced in 1893 by a much shorter one. This was in turn replaced in 1972 by the present copper-clad spire, a shorter version of the original to better match the proportions of the tower below it.

St John’s Church has much of interest in its fittings and furnishings. The crosses atop the nave and chancel are based by Pugin on those of medieval English churches, and the baptismal font, another Pugin design, is of limestone and was brought out to Australia by Bishop Willson in 1844, the year he took up his position as first Bishop of Hobart Town. To the rear of the altar is a vibrant 1859 stained glass window, the only known Australian work of Joseph Bell, an artist based in Bristol, England, and to its left is a large painting of 1828 depicting the Adoration of the Magi. It is by Mather Brown (1761–1831), a major early American artist. His 1788 portrait of John Adams and his 1786 portrait of Thomas Jefferson, both men American Presidents, are regarded as major items in the iconography of the United States of America.