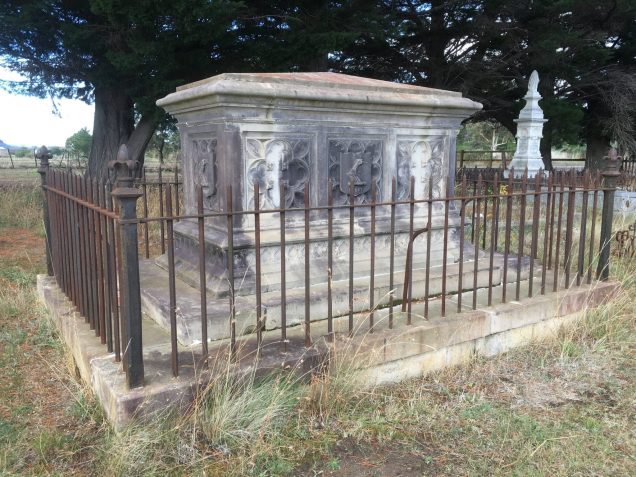 On the outskirts of Avoca in the Fingal Valley, a dirt road leads from the Esk Highway to a small un-signposted and largely unremarkable Catholic cemetery, with one significant exception. There, hidden behind a row of aged pine trees, is the grave of pastoralist and public servant Roderic O’Connor (1784–1860), a wealthy convert of Bishop Willson’s, who had a key role in making possible the construction of St Mary’s Cathedral.

The poverty of Tasmania’s Catholic population had long prevented Willson from setting about building a cathedral on the Harrington Street, Hobart, site. This all changed with the donation of £10,000 by O’Connor on the day of his first communion. Willson, in a letter dated 20 February 1860 to his friend and episcopal colleague Bishop Goold of Melbourne, stated that O’Connor wished the cathedral to be ‘superior to anything heretofore erected in the Island’. Sadly, the generous donor died in July of that year, some two months before the laying of the foundation stone, and was buried in the Avoca cemetery.

O’Connor’s grave consists of a vault surmounted by an elegantly carved rectangular monument in a literate Gothic idiom, and is from particularly high quality sandstone which has scarcely weathered in over one and a half centuries. Unusually for Tasmanian graves, the identities of its designer and stone carver are incised into the plinth.

At one end are ‘H. HUNTER ARCHITECT’ and at the other ‘B. MOLLOY MASON’. Henry Hunter was Tasmania’s most prolific architect from the second half of the nineteenth century, and a protégé of Bishop Willson. Bryan Molloy (1821–1913), also known as Brian, Bernard and ‘Old Molloy’, arrived in Hobart from Ireland as a free settler in 1854. He established himself in Harrington Street premises and gained a reputation as a skilled stone carver, executing Hunter’s designs for the High altar, Lady and Sacred Heart altars in St Mary’s Cathedral in 1880.

Molloy was a prominent member of the Hobart Catholic community and was among the signatories to the illuminated address of 23 February 1865 from the laity of Tasmania to Bishop Willson on the occasion of his departure for England. Soon after the launch of the Tasmanian Catholic Standard in 1867, Molloy was placing monthly advertisements for his services as a ‘STONE and MARBLE MASON, Headstones, Tombs, Monuments, &c.’