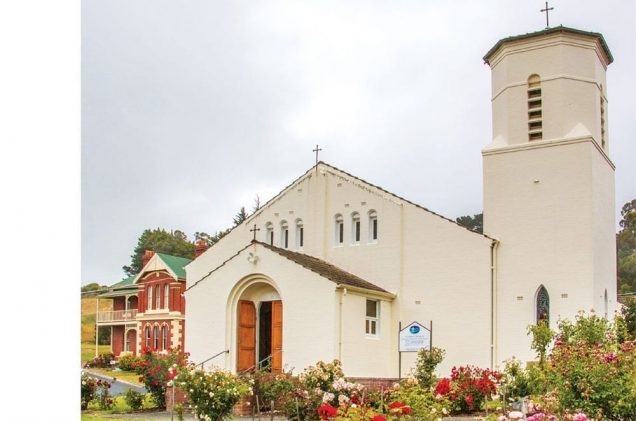 St James’ Church occupies a dominant site at the very heart of  the Huon Valley township of Cygnet, and differs from the majority of Tasmanian Catholic churches in that the building itself and several key furnishings were not designed locally.

Impetus for the construction of a new larger church to replace the existing one, a hybrid of the 1866–67 original wooden structure by Henry Hunter and a 1905 stone chancel by Douglas Salier, gathered pace in the late 1930s under the then parish priest Fr Arthur Cullen. Following his untimely death in 1939, Fr Francis Kent was appointed as the new parish priest, and it is to him that should be attributed the selection of an interstate architect, John Drummond Macpherson Moore (1888–1958) of Sydney, for the new church. Moore’s career gives the key as to why the new Cygnet church was in a style commonly referred to as Spanish Colonial Revival, making it unique in Tasmania.

A significant formative influence on Moore was a period spent during 1914–15 in the New York office of the major early twentieth-century American architect Bertram Grosvenor Goodhue (1869–1924). Goodhue is renowned as one of the leading exponents of the Modern Gothic style and as the initiator of the Spanish Colonial Revival style which would become the dominant historical regional style in California. This latter was due to his design of buildings in that idiom for the major 1915 Panama-California exposition in Balboa Park, San Diego, at the very time Moore was working in his office.

Moore returned to Australia in 1919 and set up practice as an architect. At this stage Moore’s connection with Fr Kent has not been established, but we note that he was involved with another Tasmanian project prior to his Cygnet work, namely, the design of Calvary Hospital, New Town, for the Little Company of Mary (LCM). The New Town foundation was made from the LCM convent in Lewisham, Sydney, where Moore had been active in the 1935 design and construction supervision of a new novitiate building.

Moore designed St James’ Church around July/August 1939 and on December 6 the tender of J. Dunn & Sons, Hobart, was accepted for the contract price of £5,655. The foundation stone was laid on February 18, 1940 and the buildings was solemnly blessed and opened on Sunday, October 6 of that year. In an account of the imminent opening of the new church it was noted that: ‘The general design is reminiscent of the smaller churches in Spain, and an external feature of importance is the bell tower’. We speculate whether the choice of the Spanish Colonial Revival style for the church may have been deemed particularly appropriate given the legend of St James having preached the Gospel in Spain and also because of the existence of the famous medieval shrine at Santiago de Compostela (St James of Compostela).