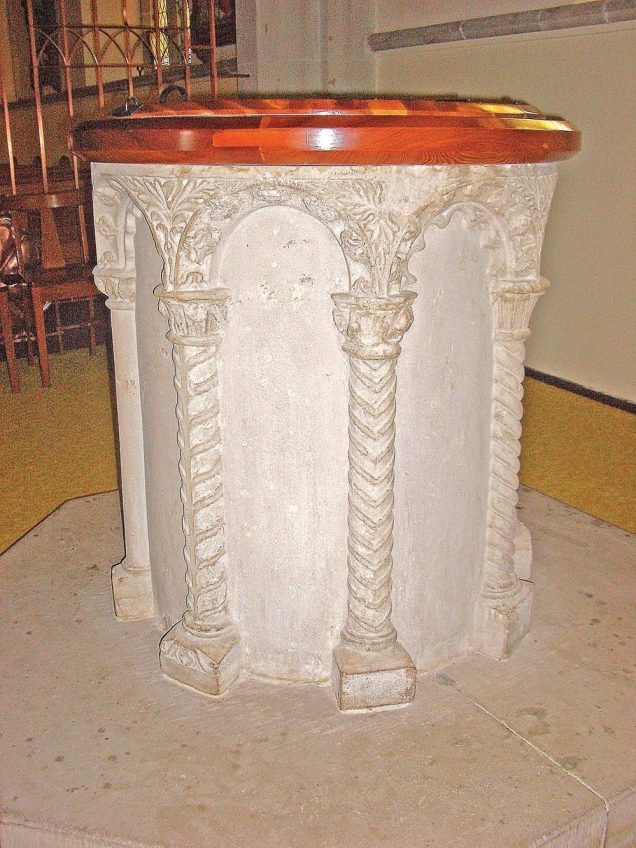 Amongst the treasures in St Mary’s Cathedral is arguably the most significant item in the cultural heritage of the Archdiocese of Hobart, namely, the baptismal font. It is without doubt the oldest, the various details pointing to its having been carved sometime between the years 1170 and 1200. As the first major furnishing to be installed in the Cathedral when the first section was opened on 4 July 1866, it was initially sited in what would become the St Joseph’s Chapel, and was moved to its present location when the baptistery was completed in 1898.

The font was brought out from England by Bishop William Willson on the barque Bella Marina in 1844, having been supplied by his close friend Pugin, the great architect and designer. Pugin collected widely medieval artifacts of wood, stone, glass and metal, both in England and on the Continent. He used some of these as aids to help revive both the letter and the spirit of medieval craft skills in England, but he also pressed others back into use for the purpose for which they had originally been designed. As the clergyman who most closely aligned himself with Pugin’s ideals and philosophies, Willson would have greatly appreciated and endorsed such ‘recycling’.

This precious survivor has about it that organic variety and unselfconscious carelessness about consistency of detail and dimensions that is the essence of real medieval work. There is neither consistency nor symmetry in the size, form and carved detail of the attached columns, their capitals and bases, and the arches over the columns. It would appear from the flat top surface of the font and its otherwise uncharacteristically sharp edge that Pugin had a skim taken off the surface so that a proper lid to his design could be fitted (the present lid is modern). This was, after, all not a museum piece in Pugin’s eyes but something to be put back into use in the service of Almighty God. Whatever it would take to achieve this, and a secure lid was necessary, was thus appropriate.

Next time you visit the Cathedral, do look into the baptistery, think of those who have gathered around the font for the over 800 years of its existence on two continents, and marvel at its providential survival.