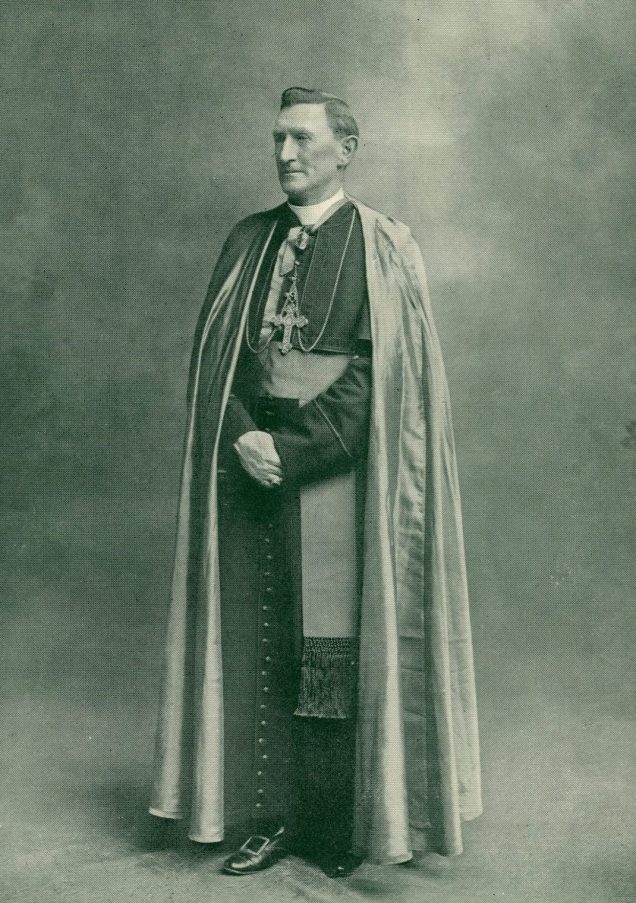 Archbishop Barry was born in Middleton, Co. Cork, Ireland. He was a priest of the Archdiocese of Sydney prior to being appointed coadjutor for Hobart in 1919. He succeeded Archbishop Delany in 1926 and died in 1929.

Motto: AD DESTINATUM PERSEQUOR (I persevere to the end)

“Be not only Catholics on Sunday, but all through the week. And be Catholics in a quiet way, without obtruding your religion, and without taking on any of the spirit of the wowser. It would fit you badly, anyhow.”

Visiting Ireland while coadjutor Archbishop of Hobart, William Barry was once searched by a British officer looking for firearms. “On giving him my card,” Archbishop Barry later quipped, “he asked me where was Hobart?” The story elicited a laugh from a crowd that was welcoming Archbishop Barry home to Tasmania. But the sectarianism of his birthplace was not only a source of stories. It clearly influenced Archbishop Barry’s concerns in Australia.

As an active member of the University of Tasmania Council he opposed the introduction of Theology as a course of study on the grounds that it would effectively be Anglican. Yet Archbishop Barry’s overall approach was more wariness than culture warring. Speaking to a group of Catholic men after Mass at St Joseph’s Church in Hobart in 1920, for example, he encouraged them to be strong in their faith without being flashy with it. He did not want them to be the sort of “man who goes round town looking for a man to fight about religion”. Instead, he proposed something firmer.

“If there is one thing the Church here in Tasmania needs,” he said, “it is a body of men, such as you are, who know their religion, who are enlightened, who are cultured, courageous, and, consequently, men who are prepared to stand up and profess their faith, and, when the occasion offers, to pay the price for it.”

A gifted speech-maker, Archbishop Barry was well-liked by his fellow bishops and often invited abroad to bless foundation stones, open churches, or perform other public duties interstate. He was similarly engaged in opening new and renovated buildings in Tasmania during his term as Archbishop, which was relatively short due to mortal illness. But despite his episcopal brevity, Archbishop Barry left a number of pastoral legacies. He facilitated the revitalisation of the Standard, encouraging it to become what he termed “a sound, interesting, and up-to-date Catholic paper.” And he addressed a significant proportion of the Catholics of Tasmania at one time or another, helping them to see the mystery behind those religious practices that could easily become tribal. Typical of this were the following words he addressed to children he was confirming in Launceston in 1928:

“It would be impossible that such a Church as the Catholic Church could be in existence were it not for the power of the Holy Spirit.”