Seeing life through the prism of our faith 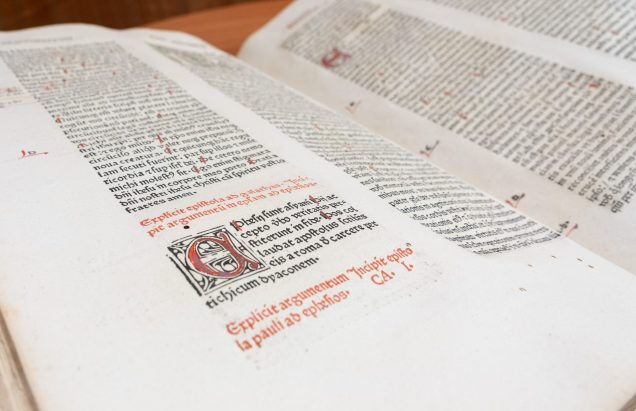 Christianity, along with Judaism and Islam, are sometimes referred to as “religions of the book”. In other words, the tenets of their belief are founded in a written text which they believe to the divinely inspired.

Thus, at Mass, after reading the Scriptural passage the reader announces, ‘Word of the Lord’.

We believe that the Scriptures are inspired by the Holy Spirit and are the word of God to us. Its contents, while composed by human authors, has a divine origin.

The Catholic Catechism teaches, “God is the author of Sacred Scripture”, adding, “The divinely revealed realities, which are contained and presented in the text of Sacred Scripture, have been written down under the inspiration of the Holy Spirit” (CCC 105).

It is true that the text of the Scriptures is influenced by the human authors, so we recognise that it is conditioned by the times and personality of the human author. However, we believe that its content transcends the limits of its human authorship.

The Bible offers timeless truth and divine wisdom. It reveals God to us and also offers us God’s plan for human life.

Thus, a believer reads the Sacred Scriptures seeking this truth and wisdom. A person of faith approaches the Scriptures listening to what God is revealing to them through the text.

The teaching of the Bible will, at times, challenge the ethos of the age. The Old Testament prophets were sent by God to call the people back from sinful ways to fidelity to the ways of God.

Their message was often confronting and offensive to the people of their time.

Similarly, Jesus challenged the people of his time, especially the religious leaders, about their ways of thinking and behaving. He often spoke of the need to repent. This was not well received and eventually led to his death.

Jesus was a controversial figure, but he never flinched from speaking the truth. He declared that “the truth will make you free” (Jn 8:23).

Recently, there has been some controversy around a text found in St Paul’s Letter to the Ephesians. Modern ears are offended by the words, “as the Church submits to Christ, so should wives to their husbands, in everything” (Eph 5:24).

However, it is never wise to take a sentence out of its context. St Paul is speaking about the relationships that should exist in marriage.

He goes on to say, “Husbands should love their wives as Christ loves the Church and sacrificed himself for her” (Eph 5:25). Husbands are expected to sacrifice themselves for their wives. They are given a very high standard to uphold, that of Christ himself.

This would have been a revolutionary teaching in the pagan culture of the day where divorce was widespread and women were readily discarded by their husbands.

Marital fidelity was debased in pagan society. Christianity proposed a revolutionary view and elevated the status of women and stressed the sanctity of the marriage bond.

When St Paul proposed that marriage should be compared to the union between Christ and his Church, he is reminding all believers that the prism through which all life should be viewed is that of the mystery of Christ. He is, in fact, proposing a real revolution in how the marriage union is to be viewed.

The teaching found here challenged the attitude of men and called on them to have a profound regard for their wives and be prepared to sacrifice themselves for the good of their wives and indeed of their families.

He repeatedly called on men to love their wives. And he called on women to respect their husbands (Eph 5:33).

We should also note that he begins the passage with the words, “Give way to one another in obedience to Christ” (Eph 5:21). There is a mutuality proposed here. It is not just one way.

St Paul is proposing a way of seeing the marriage relationship which is profoundly shaped by a Christian vision of life, grounded in the teachings of Christ.

For Christians the Bible is revelation not only about God but also about human life. It contains truth and wisdom which promotes the flourishing of human life because it gives us insight into God’s good plan for human life.