From Brother to Deacon in the journey to Priesthood 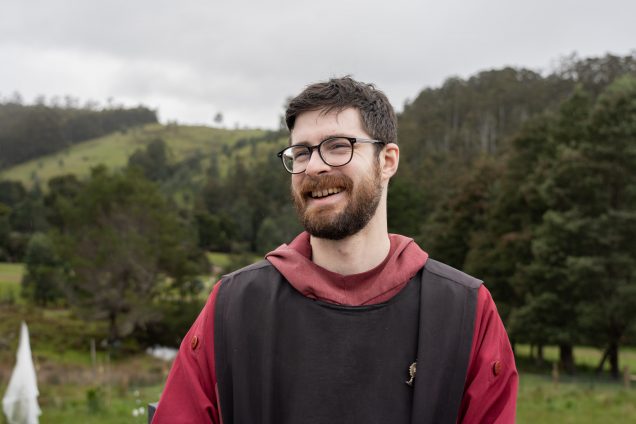 Having entered the novitiate in 2013, and making his solemn profession of vows with the Little Eucharistic Brothers of the Divine Will in 2020, Br John Joseph Martin LEB is set to take the next step in his journey to the priesthood.

With his ordination to the Diaconate at St James’ Church in Cygnet coming up on 13 December, he spoke to the Catholic Standard about his vocation and what led him to where he is today.

Originally from Perth, Western Australia and born into a Catholic family, Br John Joseph said his faith was nurtured at home and he developed an interest in Scripture at a young age.

His mother gave him a book on Fatima when he was around the same age as one of the young seers, Lucia, at the time Our Lady appeared to her.

“Our Lady is giving the children a mission in a sense – like pray, pray, pray. Pray for the salvation of souls, that souls come to know my son.

“There’s a sense of urgency about it too; penance and embracing the little trials of life and offering them up.

“Basically, there’s something you can do, there’s a mission for you – that sort of struck me, especially as a young boy,” he explained.

Supported and encouraged by priests at his local parish, Br John Joseph said he felt the call to the priesthood at a very young age.

“I know for certain at least by the age of 11, I was experiencing interiorly on that subjective level, the conviction that I was called to the priesthood,” he said.

Br John Joseph added that despite attempts to “want otherwise” at times, there was an unshakeable inner desire, conviction and knowledge of his vocation.

“Around the age of 19, I had dropped my guard and fully committed myself to heeding that call, heeding that voice of the Lord.

“I couldn’t separate living out my faith and taking this call seriously…the two were intertwined,” he said.

“I figured I would just live life how a Catholic is supposed to live, like a ship in the night following the lighthouse.

“Then you end up crashing upon the shore where the Lord wants you to be.”

Through his involvement in perpetual Eucharistic Adoration with the Apostles of Perpetual Adoration in Perth, he met Br Gilbert Joseph Bloomer LEB, who later invited him to join religious life as a consecrated Brother.

“I felt called to be a bit more active than that; a contemplative-active life, which involved daily Eucharistic adoration,” Br John Joseph said.

However, he explained that there were no active groups which offered that sort of life in Australia at the time.

What followed was the formal establishment of the Little Eucharistic Brothers of Divine Will in 2013 in Perth. The community moved to the Archdiocese of Hobart a year later and was granted ad experimentum canonical status as a Public Association of Christ’s Faithful in 2021.

As he approaches his ordination to the Diaconate, and continues along the path to priesthood, Br John Joseph said peace and joy were found in doing God’s will.

“There’s that quote from the Psalms which speaks of how good and pleasant it is when brothers dwell in unity.

“Of course, we’re human beings and we all have imperfections, but there’s a great sense of joy… in that sense of living a shared life together for the same purpose.

“And that purpose is focused on Christ, to live in fellowship with one’s brothers and to be on the same page, to have this same call.

“I hope and pray the Lord will bring that to a full fruition in my case, to carry that sense of brotherhood into the priesthood.”