Recalling 25 years of priesthood and a second chance at life 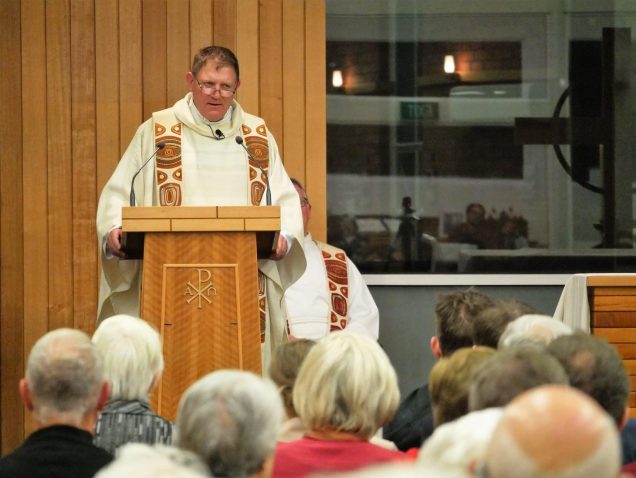 Fr Richard Ross recalls his ordination to the priesthood 25 years ago as an “incredibly humbling” experience of receiving “love and affirmation from the people of God”.

Following his ordination on 19 September 1997 at St Mary’s Cathedral in Hobart, the headline in The Standard newspaper, was simply “Awesome”. This was the word Fr Richard had used to describe the experience at the time.

“It was just a wonderful evening,” he said.

As a young man growing up in Bellerive he felt attracted to the priesthood due to the down-to-earth nature of the priests he knew, and the way they used their gifts to “build up the community and to enrich the lives of others”.

He was particularly impressed by the role of priests in comforting people during difficult times, such as the loss of a loved one. He felt a strong desire “to make a difference and to say something significant in the midst of life’s worst situations… [offering] words of hope and love and strength in the face of tragedy and loss.”

His first parish was Our Lady of Lourdes in Devonport which he described as a “wonderful community” full of “fantastic people”.

After three-and-a-half years there Fr Richard was moved to the Launceston Parish which was to be his home for 15 years.

It was during his time at Launceston that Fr Richard endured the most difficult period of his life. In March 2010 he was diagnosed with stage four bowel cancer and given a life expectancy of three to six months. As he underwent aggressive chemotherapy treatment, Fr Richard said he felt “carried by people in prayer”.

“Their love for me was tangible and practical and genuine and deep and lasting. And that was a very affirming experience on a human level. It was an experience of resilience, of just toughing it out in a way and somehow finding strength on a spiritual level through that.”

Even though he was initially diagnosed with terminal cancer, by the end of his four years of medical treatment, Fr Richard was told he was completely cured of the cancer. He is reluctant to use the word “miracle” despite the fact medical staff told him they’d never seen anything like it before.

“It’s good to be alive… I’m hesitant now to claim this, the word miracle. I don’t know. It’s not for me to claim that anyway. It’s the word my oncologist uses.”

After taking five months away from ministry in order to recover following his treatment, Fr Richard served for three years in the Meander Valley Parish.

He was then returned to his home territory of Bellerive-Lindisfarne where he has served as Parish Priest for the past three-and-a-half years.

Earlier this year, after seeking permission from Archbishop Julian, Fr Richard announced his resignation as Parish Priest at Bellerive, in order to care for his elderly father who suffers from several health conditions. Given the circumstances, Fr Richard said he felt it was only fair to resign rather than leave the parish in “caretaker” mode.

“That was the toughest call I’ve ever made without any shadow of a doubt,” he said.

Parishioners had been “very supportive and understanding”, he added.

Looking back over 25 years of priesthood, Fr Richard said one of the most important lessons he had learnt is to see Christ in others.

“There’s Christ in this person, whoever they are, whatever their experience… So if I can find that and help them find Christ in them[selves], in their story, then that’s enough. It’s everything really.”