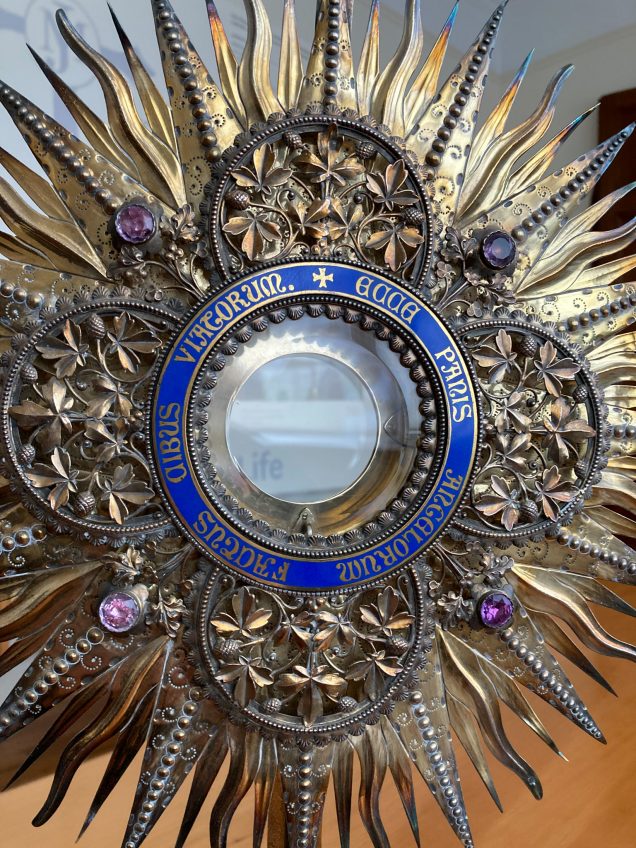 A significant proportion of the ecclesiastical metalwork in Tasmania is French in origin.

This is primarily due to the Lyon firm of Louis Gille et Cie which had sales outlets in Sydney and Melbourne around the turn of the twentieth century.

It advertised in the official yearbook of the Catholic Church in Australia and published a huge, illustrated catalogue, setting its wares directly before the eyes of its clerical clients with much success, as evidenced by the large number of Gille products in dioceses across the country.

Another French firm is represented here with just one item, a splendid silver monstrance, which is way beyond the quality of Gille’s export products.

It is the work of goldsmith Jean-Alexandre Chertier whose studio was at 46 Rue Mazarine on the left bank in Paris, an area popular with a number of church requisites manufacturing establishments.

His punchmark (official metalwork stamp) was registered on 15 April 1857 and removed from the register on 16 June 1890. Chertier was represented at the 1862 International Exhibition in London, and he made metalwork objects to the designs of several French architects, including Viollet-le-Duc who was the major figure in the revival of Gothic in France.

He executed the spectacular canopy for the tomb of St Martin of Tours (c.315–397), placed over the high altar in the basilica there and, amongst his many other significant works, made the crown for the statue of Our Lady of the Sacred Heart in the Sacred Heart Basilica, Issoudun, a town in central France.

Set with facetted stones, its delicate and refined design displays a full range of the goldsmith’s craft. The central roundel which houses the Blessed Sacrament bears the text in gold on blue enamel, ‘ECCE PANIS ANGELORUM FACTUS CIBUS VIATORUM’ (Behold the bread of angels made as food for pilgrims).

These words are contained in the eucharistic hymn Lauda Sion, composed by the great Dominican Doctor of the Church, St Thomas Aquinas (1227–1274), and written at the request of Pope Urban IV on the occasion of the institution of the feast of Corpus Christi in 1264.