Marriage as a living icon of God’s love 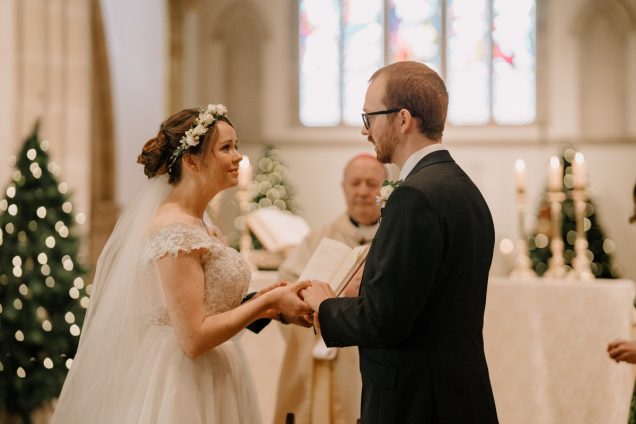 Having Christ at the centre and striving for heaven amidst the trials of life, so that their marriage may be a living icon of Jesus’ love, lies at the heart of Callum and Kate Woods’ vocation.

Still in their first year of marriage, having been wed on 27 December 2021 at St Mary’s Cathedral in Hobart by Archbishop Julian, Callum and Kate have already come to learn a lot on their journey so far.

Kate said she had become aware that every moment is a gift of self to God through the other, expressed in different ways.

“Prayer, intimacy, household chores, work, friendships, the Mass and sharing vulnerably – these are all part of the Sacrament; part of our free, total, faithful and fruitful ‘yes’ to each other and to the Lord.

“Ideally, that ‘yes’ becomes a symbol for others that points them to heaven,” she said.

“We want our marriage to be a living icon of Jesus’ love, and the more fully we give ourselves in humility, generosity and tenderness, the more real an image of His love we share with the world.”

“I’m also discovering how much of a logistical project marriage is every day.

“You run a household and finances together, make decisions big and small, support each other emotionally and spiritually.

“Apart from love and friendship, it’s great to be married to someone whose judgment you trust and with whom you feel you can divide responsibilities fairly and happily,” Kate said.

Friends for two years before they began dating, Callum said friendship was something he could not overstate the importance of in a relationship.

“Kate and I were friends first, and we remain now each other’s best friend,” he said.

“Friendship built on mutual interests, deep conversation, sharing of hopes and feelings, being able to share one’s faith life by praying together, going to Mass together, and serving together is so important.

“I’m not downplaying the romantic aspect but think it’s important to talk about, especially when our culture generally overemphasises romantic feelings to the detriment of a solid foundation of shared friendship. Love and friendship aren’t actually opposed!” he said.

The couple were engaged in 2020 after two years of dating and discernment, beginning their preparation for marriage.

A difficult period of engagement followed, with wedding plans changing multiple times and the unfortunate passing of Kate’s father, just two months before the intended date for their Nuptial Mass in New Zealand.

Kate said they felt blessed despite the challenges on the journey towards marriage.

“I think the challenges we’ve faced together strengthened our relationship in powerful ways and helped us discern our vocation clearly,” she explained.

“When you’ve suffered, cried, prayed and found a way through the darkness with someone, you know and trust them in ways you wouldn’t otherwise have discovered.”

Finding themselves both unexpectedly moving to Hobart for work on short notice, the couple decided on getting married at St Mary’s Cathedral.

“The border was still closed and my parents were stuck working overseas, so we cancelled our wedding in New Zealand and instead planned a very intimate ceremony here in Hobart,” Callum said.

“Archbishop Julian kindly agreed to be our celebrant and we had just two witnesses – Kate’s mum and my sister.

“It was a very different wedding to what we had ever expected or planned, but an incredibly sacred day which we treasure deeply.

“As people who chose to have a marriage ceremony with only the celebrant and two witnesses, I can say with certainty that the sacramental bond of marriage was, from the start, more important to us than the ‘stuff’ that usually comes with weddings,” he said.

Kate said she was grateful despite all the disruptions and changes in their plans.

“At times, I felt a huge sense of grief when we had to let go of certain friends being able to attend, or venues we were nostalgically attached to, or the hope of my Dad walking me down the aisle.

“It felt so rough to let go of pretty much everything I’d envisaged for ‘my wedding day’.

“But instead, I got to (and get to) experience our marriage, which is so much more beautiful and sacred and special than any of the superficial details.

“Surrendering like that isn’t easy, but it makes your heart free to love and appreciate what matters most.

“If you ever find yourself having to prioritise either the sacrament or the party, choose the sacrament – it’s the bit that lasts,” she concluded.