A festival of light in the midst of darkness 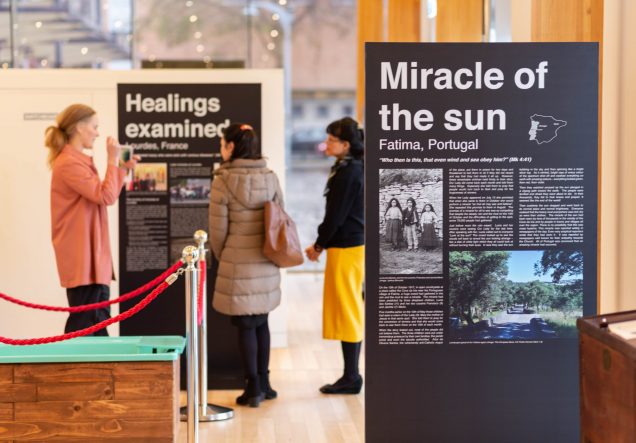 Held in the midst of the annual Dark Mofo festival in Hobart, the recent ‘Miraculous Events: Science Tests Faith’ exhibition drew many people to the light of God’s miraculous activity in the world.

Event organiser, Dr Christine Wood, said many who attended the exhibition hosted by the Archdiocese of Hobart from 15 to 26 June were “moved” and “amazed” at the evidence presented for the reality of miracles.

“The entire event was a spectacular festival of light in the midst of darkness. It was an experience of God’s manifest goodness to us, a celebration of the gift of human life, and the mystery of God’s interaction in our daily lives,” said Dr Wood, Director of the Office of Evangelisation and Catechesis.

At the official opening of the exhibition at Hobart’s Waterside Pavilion, Archbishop Julian said it was appropriate the event was held in a public location.

“It is designed not just to confirm the faith of believers but to invite the non-believer to explore the possibility of the miraculous,” Archbishop Julian said.

Miracles still happen, even today, the Archbishop said, and for Christians miracles were signs of God’s love for humanity.

“The Christian believes that the definitive intervention of God in human history was the Son of God becoming incarnate in Jesus Christ. The greatest miracle of all!”

“What is important to note is that this exhibition shows the interaction of faith and science. They are not two separate realities which are somehow opposed. There are not two worldviews – that of science and that of the miraculous.

“Faith and reason are in fact the two wings on which the person can fly to find the truth. Miracles open a door into another dimension of human existence – the realm of the spirit, the realm of God.”

The exhibition consisted of interactive and documentary styled presentations of more than 20 miracles, including eyewitness testimonies and findings from scientific investigations.

Scientific evidence was presented from inexplicable healings including healings from deafness, blindness, cancer, paralysis, and even death.

“The exceptional quality of the exhibition, designed by artist Karin Chan, in collaboration with a team of a dozen talented people, demonstrates that the Archdiocese of Hobart is punching above its weight in terms of evangelisation in Australia using new media and new expressions of the Gospel message,” Dr Wood said.

“Many people were amazed at the miracles themselves and how God is active in people’s lives, not just in centuries past, but even today.”

Presentations were also given by scientific and medical experts, who discussed the evidence from miraculous events, including Dr Umberto Villa, an emergency trainee doctor at the Royal Darwin Hospital, who spoke on Eucharistic miracles.

Foreign Editor of The Australian newspaper, Greg Sheridan, also spoke on ‘Christianity’s contribution to Western Civilisation’, and the historical case for Jesus.

Dr Wood said she was asked numerous times if the exhibition would travel around Australia, and that due to the number of talented people involved in putting the event together there was “much potential for future exhibitions”.