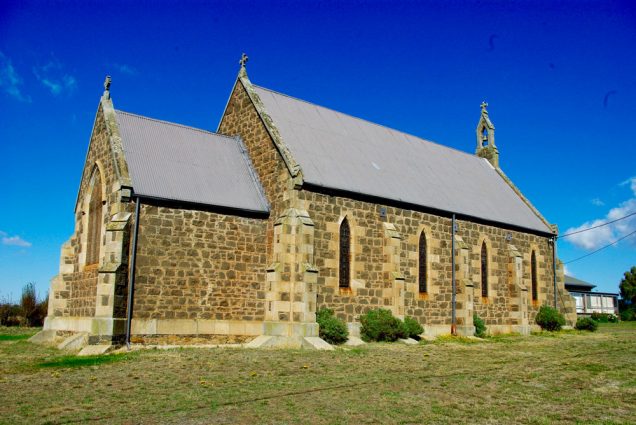 St Michael’s at Campbell Town opened in 1856, after taking 10 years to come to fruition. Bishop Robert Willson had been the driving force behind establishing a Catholic church in a “totally neglected” district but colonial authorities were reluctant to assist.

Tasmania’s first Catholics were mostly convicts. Many of those who arrived as free settlers before the 1880s were economic refugees from Ireland.

The arrival of the first Bishop of Hobart, Robert Willson, in 1884 brought effective leadership to the Church. It was not until the 1860s, however – when a number of Catholics began to prosper through farming, small-business and in the professions – that the Church began to make a substantial contribution to the colony’s built environment.

Willson developed a good relationship with Governor Denision, which eventually resulted in suitable land grants that enabled the building of a Catholic church in Campbell Town. The People’s Advocate reported on the laying of the foundation stone on the 28th June 1856, saying Bishop Willson “delivered a most eloquent and impressive discourse.”

The Hobart Mercury described the exterior of the church, which remains virtually unchanged today.

“The church is a very handsome structure, the style of architecture adopted, being early English, and consists of nave, chancel and sacristy,” it read.

“The design was made and carried into effect by Mr H.G. Hunter of Hobart Town, and though humble in its pretensions its appearance is very striking and picturesque”.

At the time of the church’s 50th Jubilee in 1908, substantial improvements were made to the interior of the church, most notably the windows which were described by the Daily Telegraph as the “finest of any country church in Tasmania”.

“The principal and most striking improvement is in the beautiful stained, glass windows, every window being of exquisite design and workmanship,” the paper said.

St Michael’s continues to serve Catholics of Campbell Town and the surrounding districts. It is a reminder of the early struggles to establish Catholic churches in Tasmania, but on the other hand, the interdenominational cooperation which was very typical in country towns of this era.