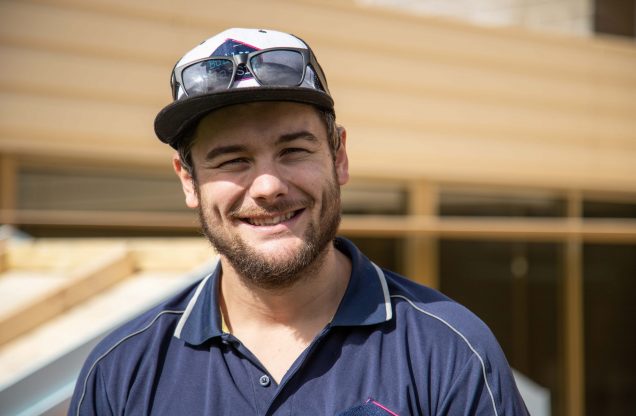 Initiatives such as Build Up Tassie are essential to the community and offer young people the opportunity to turn their lives around, according to the program’s new coach, Robbie Crawford.

The former carpenter plans to use his position to empower youth to become responsible and independent adults who strive to achieve their goals.

“Programs like Build Up Tassie provide alternate pathways to employment and education whilst also enriching the lives of young people with interpersonal skills and awareness,” he said.

“Outside of the educational benefits, our growth mindset, person-centred approach allows a safe and empowering environment that can provide young people who perhaps struggled in the more formal education settings to thrive and learn.”

Robbie, who spent five years working as a carpenter in Hobart before heading off to travel around Australia, has worked in the youth sector in Broome for the past seven years.

“After being off the tools for a while, I started volunteering in youth centres within the Kimberley region of North West Australia,” he explained.

“I thoroughly enjoyed working with the indigenous demographic and my passion for supporting and advocating for disadvantaged youth grew. I’ve spent time working with youth from all walks of life and have been extremely privileged to be involved in numerous amazing programs and initiatives both within indigenous communities and here in Hobart as well.”

Robbie and his partner recently decided to head home to Tasmania to have their first baby surrounded by family.

“As soon as I came across the Build Up Tassie advertisement, I became instantly excited,” he said.

“The role revolves around both my passions in life – building and supporting young people.”

With ten years in the building industry and the social work realm under his belt, Robbie was well equipped for the coaching role, which he commenced in January this year.

“I have seen some amazing turn arounds in young people who have come from a chequered past,” he said.

“Care and kindness may not be something they’ve ever experienced before, but when applied consistently and genuinely, and a real relationship is formed, you have the opportunity to make a real positive change in someone’s life and the community.”