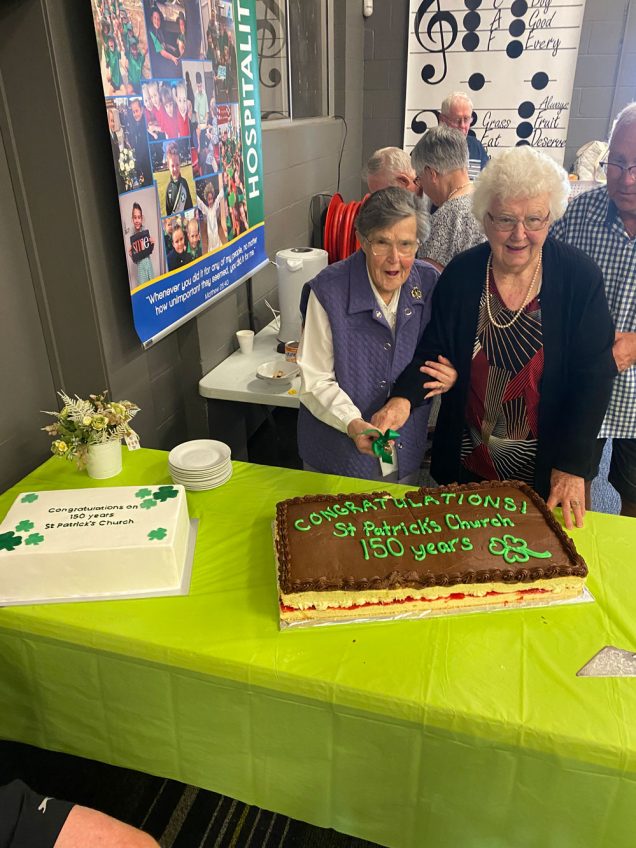 St Patrick’s Church at Latrobe has just turned 150, and cousins Zillah Jones and Kath Cochrane have been deeply involved in nearly two-thirds of its history.

Mrs Jones, 92, and Mrs Cochrane, 90, both of Latrobe, had the honour of cutting the celebration cake at the sesquicentenary on 28 November.

Mrs Jones said: “My mother was the organist at St Patrick’s for 53 years and she would get my sisters and me out of bed for seven o’clock Mass, and we were always there on Sundays.

“I was baptised there in 1929, had first communion from Fr Donald Shaw in about 1936, confirmed by Archbishop Justin Simonds, married in 1953, and hopefully buried there too!”

Mrs Jones firmly believes that St Patrick’s Church is quite simply “the most beautiful church anywhere”.

“There is a feeling of serenity from the moment you go through the front door,” Mrs Jones added.

It is no surprise then that Mrs Jones and other parishioners were devastated back in December 2000 when the church was severely damaged by an arson attack.

“I bawled my eyes out when I saw the church and what had happened,” Mrs Jones said. It was repaired and reopened by [now Emeritus] Archbishop Adrian Doyle in August 2001.

Mrs Cochrane has similar strong ties with the church. Her father, John Clarke, was a long-standing member of the choir.

“I’ve gone to Mass all my life” she said.

“It’s also about meeting up, and staying friends with all our old comrades.”

The sesquicentenary was everything she could have hoped for.

“It couldn’t have been a better service. It was lovely, the crowd was wonderful and we all met up with a lot of the old folk. Everyone did a wonderful job.”

Archbishop Julian, who concelebrated Mass, said that a number of the original features of the church were lost in the fire of 2000 and there was a permanent reminder in the damaged tabernacle.

He said that a church is more than a meeting hall. It is also a permanently-erected house of God.

“We do not gather simply as a community to celebrate our faith,” Archbishop Julian said.

“We come to encounter the silent, mysterious and very real presence of God. We come to a church to enter our relationship with God, to meet Him and engage with Him. He is present, uniquely present in every Catholic church. We come to be renewed and inflamed spiritually.”

“There was a sense of satisfaction and achievement; of feeling proud of their own small church,” Fr Jaison said.

“It was not just a celebration for Catholics in Latrobe but for the whole town who wanted to be part of the celebration, and to contribute to this wonderful milestone.”