Bishops of Hobart laid to rest in St Mary’s crypt 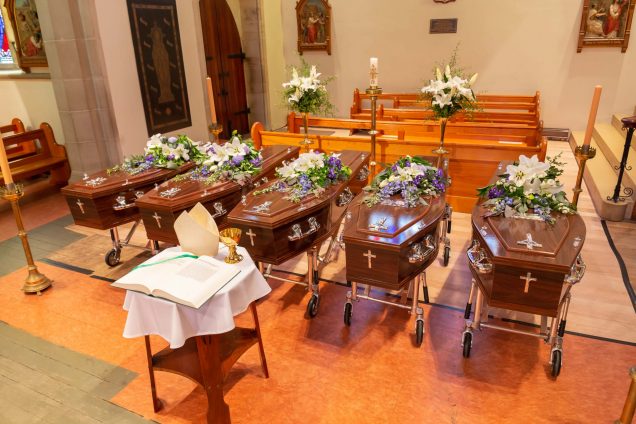 The mortal remains of four archbishops and one priest were reinterred in the crypt of St Mary’s Cathedral in Hobart, following the Vigil Mass for the Solemnity of the Immaculate Conception of the Blessed Virgin Mary, on 8 December.

The remains of Archbishops Daniel Murphy, Patrick Delany, William Barry, William Hayden and pioneer priest, Fr Philip Conolly, were exhumed in September from beneath the floor of the North Transept of the Cathedral.

The remains of eight of the nine previous bishops of Hobart are now interred in the Cathedral crypt. Absent are the remains of Archbishop Justin Simonds who was appointed to the Melbourne Archdiocese and laid to rest there under St Patrick’s Cathedral.

In his homily, Archbishop Julian said it was fitting that the reinterment took place on the “illustrious feast in honour of the Mother of God”, since the Cathedral is dedicated to Our Lady.

He spoke of how each of the bishops had responded to God’s call in seeking to serve him in Tasmania.

“That call led them to Van Diemen’s Land, for them all I am sure it was an unexpected outcome of their ‘yes’ to God,” Archbishop Julian said.

“It is fitting that they lie in the crypt with the other bishops. Tonight, we honour them as we celebrate this Mass and conduct the rite of interment.”

Archbishop Julian thanked all those involved in the exhumation and reinterment process, including Ben Wilson, the Chief Executive Officer of St Joseph Affordable Homes, and Chris Ryan, the Executive Director of the Archdiocese of Hobart.

After the remains were exhumed in September, they were placed in the care of Graham Family Funeral Directors until the reinterment.

“It is a great honour to have had the opportunity to reunite all the bishops in the crypt and give them a final place where we know they are and we can go and engage in that history, and also pray for them,” Mr McKenna said.

“We now can see the history of the succession of the bishops and get some sense of our own place in the Church by virtue of seeing where we’re situated in that continuum of faith in Tasmania. So it’s quite an exciting time.”

Mr McKenna said some interesting discoveries had been made during the exhumation process, including finding that each of the bishops had been buried with a pallium, an ecclesiastical vestment made of lamb’s wool that is currently only bestowed on the pope and metropolitan archbishops. A number of the bishops’ buckled shoes were also found still intact.

The first bishops to be interred in the Cathedral’s crypt were Archbishops Tweedy, Guilford Young and D’Arcy in 2016. The remains of the first Bishop of Hobart, Robert William Willson, were also interred in the crypt after being repatriated from Nottingham in England in 2017.

“In the fullness of time when the restoration of the Cathedral is done properly, the crypt will be a major feature of the heritage element of the Cathedral as we unpack the story of the building to everybody,” Mr McKenna said.