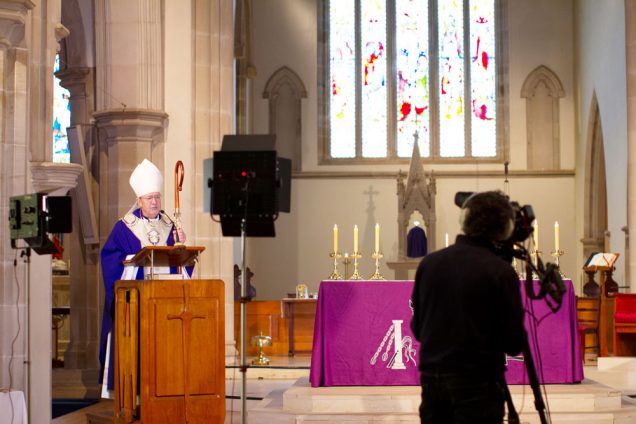 Never before has there been such demand for virtually accessible liturgies as during this current time of COVID lockdowns. While watching Mass online or on TV will never be equivalent to attending in person, having virtual access can be enormously beneficial to those unable to attend due to illness, infirmity, distance, imprisonment, or because of COVID restrictions.

Since 1971 Mass for You at Home, the longest running religious program on Australian television, has beamed the Catholic Mass into people’s homes. Originally a project of the Archdiocese of Melbourne, this ministry is now produced by the Diocese of Wollongong in partnership with the Australian Catholic Bishops Conference. Over the years it has evolved from its humble beginnings, to today’s production which many find beautiful, engaging and uplifting.

Archbishop Julian said Mass for You at Home has provided a valuable service over the years.

“It has served the needs of those who because of age or infirmity are not able to attend their local parish,” Archbishop Julian commented. “It is a wonderful service that deserves recognition.”

There is also an abundance of online options for watching Mass livestreamed or pre-recorded. A quick search on YouTube for a livestreamed Catholic Mass will uncover a multitude to choose from. Since the beginning of the COVID lockdowns last year, many local Catholic parishes around Australia, and indeed around the world, are livestreaming their masses. Most dioceses are also livestreaming Mass from their cathedrals.

Here in Tasmania, Sunday Mass is livestreamed from St Mary’s Cathedral in Hobart at 10.30am AEST and can be accessed via the Hobart Archdiocese’s YouTube channel.

CathNews also provides Mass on Demand streamed daily from Our Lady of the Way Parish in North Sydney through the CathNews YouTube channel. Find it here.

Of course, watching the Mass on television or online can never replace being physically present. Worshipping together as the Body of Christ is at the heart of Catholic life and the Church teaches that the faithful are obliged to attend Sunday Mass unless prevented by a serious reason.

However, during times of difficulty, illness or infirmity, it is a blessing to have access to liturgies online or televised, allowing us at least to hear and see the Mass celebrated and to pray together in spirit.