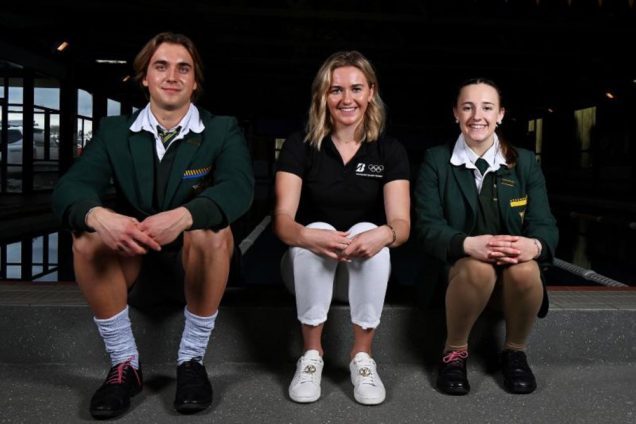 Olympic gold medallist Ariarne Titmus quickly won over students from her former schools in Launceston with her inspirational message of working hard to chase your dreams.

Ariarne, 21, now based in Brisbane, talked to students at Sacred Heart Catholic Primary School and St Patrick’s College during a visit back to her home town last month, following her Toyko Olympics swimming success where she claimed two gold, a silver and a bronze medals.

Ariarne and her family relocated to Queensland in 2015 to further her swimming career.

“It’s incredibly rewarding and humbling knowing that sharing my own story can make such a difference to others, and shape how they approach going about fulfilling their dreams in the same way I did,” Ariarne said in a statement.

“I wouldn’t be an Olympic gold medallist without the inspiration from some of my heroes and the motivation of those around me, and I’m proud to be able to help inspire the next generation through activities like this.”

Sacred Heart’s Julian Davie, who taught Ariarne in grade six, praised the ‘humble and gracious’ former student and said the school had followed her sporting journey with enthusiasm and pride.

“She said it meant a lot to her to come back to Sacred Heart, to share her success,” Mr Davie said.

“She inspired the whole school community, from kinder to grade six, and the staff, with her joy and happiness… [and] with messages of never giving up, pushing yourself and chasing your dreams.”

At St Patrick’s College, Ariarne was escorted to an assembly by the college’s Green Beret Drumline band and she also spent time with swim team members.

Principal Tony Daley said afterwards: “Ariarne’s visit has meant the world to our students and staff.

“I think it’s always inspiring, but particularly in regional areas, for students to see someone from their own community succeeding on the world stage. Ariarne is an outstanding role model and represents the importance of youth engaging in sport and physical activity.”

During the visit back to Tasmania, Ariane became the first woman and the youngest person to receive the keys to the city of Launceston and she also conducted a popular swim clinic with Paralympian Jacob Templeton, a former student of St Brendan-Shaw College, Devonport.