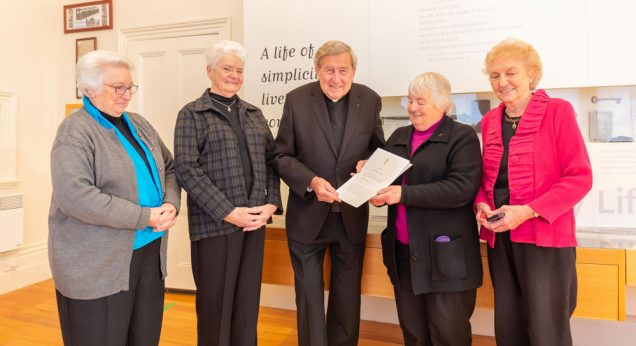 When Pope John Paul II announced his plan to visit Australia for the beatification of Mary MacKillop in 1995, Father Michael Tate was not in the least surprised. The then-Australian Ambassador to the Holy See had already gleaned unexpected insight into the Pope’s intentions the year before, during his presentation of credentials in Rome.

“I recall quite vividly the occasion on the 13th of January 1994, when I presented my credentials to Pope John Paul II,” Fr Tate said.

“At the same time, one hands over a letter indicating the issues and general hopes for the relationship over the next several years.”

This letter, Fr Tate explained, mentioned the likelihood that Mary MacKillop would be beatified during his attachment to the Holy See.

“Australians would be honoured if you could travel to Australia to beatify Mother Mary MacKillop,” the correspondence read.

“A papal visit to Australia for the beatification would be a source of joy for the Australian community.”

Fr Tate said His Holiness approached for a brief encounter, telling Fr Tate he hoped to visit Australia for the momentous occasion.

“That was the first indication that the Pope hoped to be able to visit for the first beatification,” Fr Tate recollected.

“What was important to him, I think, was Mary Mackillop. But the idea of going to Australia for the first beatification was also very prominent in his thinking that this would be a great thing to do.”

As the Pope moved on to the next ambassador, Fr Tate said a Monsignor quickly approached.

“He came scurrying up to me, and said ‘This has not been communicated to the Australian government’. The implication being, don’t say anything publicly.”

“Of course, I went back to the office and put it in a cable, back to the Department of Foreign Affairs and Trade, naturally. But nothing was said publicly,” Fr Tate continued.

“It might be said that I was the first Australian to learn of the intention of the Pope to come to Australia for the beatification of Mary MacKillop.”

In a timely tribute, Fr Tate presented his memorabilia from the occasion to the Sisters of St Joseph History Centre on the 8th August – the Feast Day of Mary MacKillop.

“I’m giving these to this wonderful centre for the history and archives of the centre of St Joseph of the Sacred Heart, particularly in Tasmania for the little Tasmanian connection,” he said.

“I hope you have many generations to come and find that material of interest in Tasmania in connection with the beautification of Mary MacKillop.”

Sr Colleen Power said the memorabilia – a copy of a letter signed by the Pope, along with a photo of Fr Tate and His Holiness – was a wonderful addition to the Josephite Mission and History centre.

“It adds to what we’ve already got and brings Mary Mackillop a bit more to the fore, because this is the continuing story of the Sisters of St Joseph,” she said.