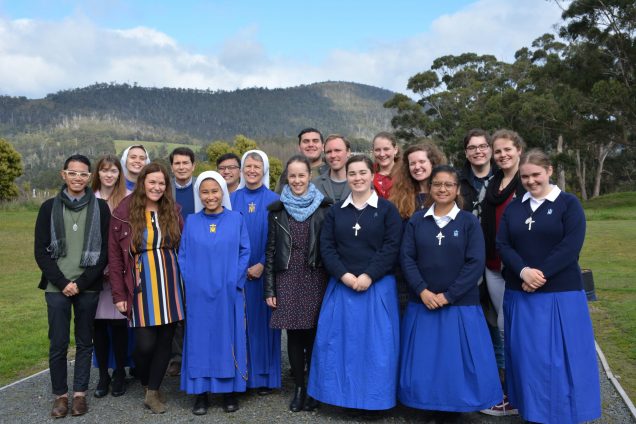 After several faith-filled years in Tasmania, the Sisters of the Immaculata are returning to mainland Australia to continue their ministry to young people.

An Association of Christ’s Faithful with a mission for spiritual renewal through Eucharistic Adoration and faith formation, particularly in Parishes and with young people, the Immaculata Sisters began in 2008 in Sydney by Karin Ramsden (now, Mother Mary Therese) under the guidance of then Auxiliary Bishop Julian Porteous.

Following his appointment as Archbishop of Hobart, the community of sisters decided to re-locate to Tasmania in 2013. They established themselves in the state’s Huon Valley at a former presbytery in the township of Franklin.

“The Sisters, along with lay members of the Immaculata community have done much good work in Tasmania, especially among young people. They have contributed a great deal to the faith life of the Archdiocese of Hobart,” said Archbishop Julian.

“The Sisters engaged with the Huon Valley parish, especially developing a ministry to young people. They also worked in various Catholic schools and parishes across Tasmania, offering youth activities, talks and retreats. They have also developed a university ministry, assisted by a number of lay helpers.”

“The community has recently been considering moving back to the mainland and establishing themselves in another diocese,” His Grace said.

“I am sad to see them go. I wish God’s blessing upon them as they seek new directions for their life and ministry.”

The immediate superior of the community, and foundress of the Immaculata Sisters Mother Mary Therese Ramsden said:

“We’re thankful to Archbishop Porteous for listening to God and encouraging me to step out as a religious sister and supporting the beginnings of our new little community.  We are also grateful for the time that we have been able to serve in the Archdiocese of Hobart and we have a great love for the people of Tasmania – they have forever touched our lives and they will be in our prayers.  We return to the mainland with God calling us to step out in this new chapter and we feel blessed for the time that we have spent here.”

The Sisters are in discussions with an interstate bishop seeking to be accepted to reside and work within his diocese.

Photo: Mother Mary Therese Ramsden (centre, back), with members of the Immaculata community and participants at a previous mission school event in Tasmania.