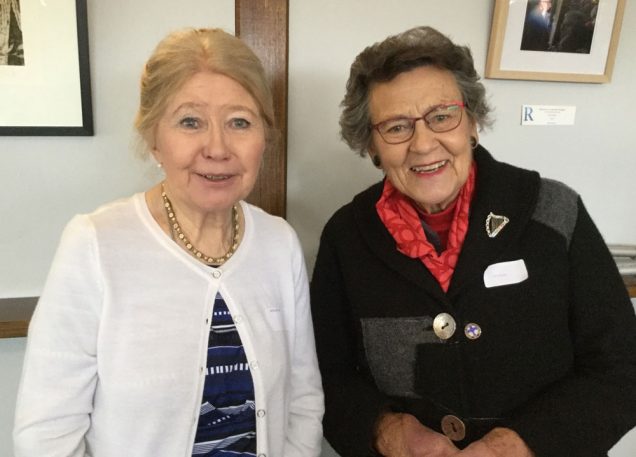 Nostalgia, faith and joy were the hallmarks for the 80th anniversary of the Catholic Women’s League in Tasmania.
The CWL celebrated the milestone with Mass at the Church of the Apostles in Launceston followed by lunch at the Rosevears Hotel on 15 August.

Archbishop Julian, who celebrated the Mass on the feast day of the Assumption of the Blessed Virgin Mary, offered words of encouragement to the CWL.

“The League has evolved in its mission over the years,” Archbishop Julian said.

“It began as a social gathering with the intention of engaging in charitable works. It has now become more focussed on the religious and intellectual formation of its members to equip them to work for a more Christian society by prayer and action. I commend you as desiring to be an active voice of women of faith in our society.

“It is fitting … as we honour Mary today that you invoke her intercession for the future direction of the league, that it may be a place where Catholic women are strengthened in their faith, formed in Catholic teaching and inspired to be active in advancing Christian truth in the broader society.”

CWL state secretary Wendy Fittler, of George Town, said members and friends had enjoyed a wonderful day, with Mass followed by lunch and a historic display .

“More than 45 members, past members and friends from Hobart, Richmond, Launceston, Scottsdale, George Town and Devonport travelled to share lunch at the Rosevears Hotel, where there was a delicious meal and a wonderful display of memorabilia loaned by members,” Mrs Fittler said.

“Many nostalgic and joyous comments were heard about memories from the past as people looked through photos and shared stories of events and friends. A silent auction was also held and money raised from this will be shared between to charities, one local and one international.”

New state president Wendy Harrap, of George Town, was keen to mark the anniversary, after reading Women of Faith and Action by Anne Rushton-Nuss, about the history of the CWL in the state.

The CWL started in Launceston in 1941 thanks to the energy of parishioner Gwen Mullins. Its aim was to bring Catholic women together, engage in charitable works and play a part in public life. Emphasis was placed on faith and members were expected to belong to the Sacred Heart Sodality. The CWL became an advocate for Church teachings about social, moral and bioethical issues.

The League continued to grow rapidly and by 1944 had 1700 members. Branches were established in nearly every parish in the state which was divided into four regions. The first Conference was held in Launceston in 1944 and went on to be held annually for more than 50 years.

Today there are CWL branches in Launceston, George Town, Oatlands, Richmond and Hobart.