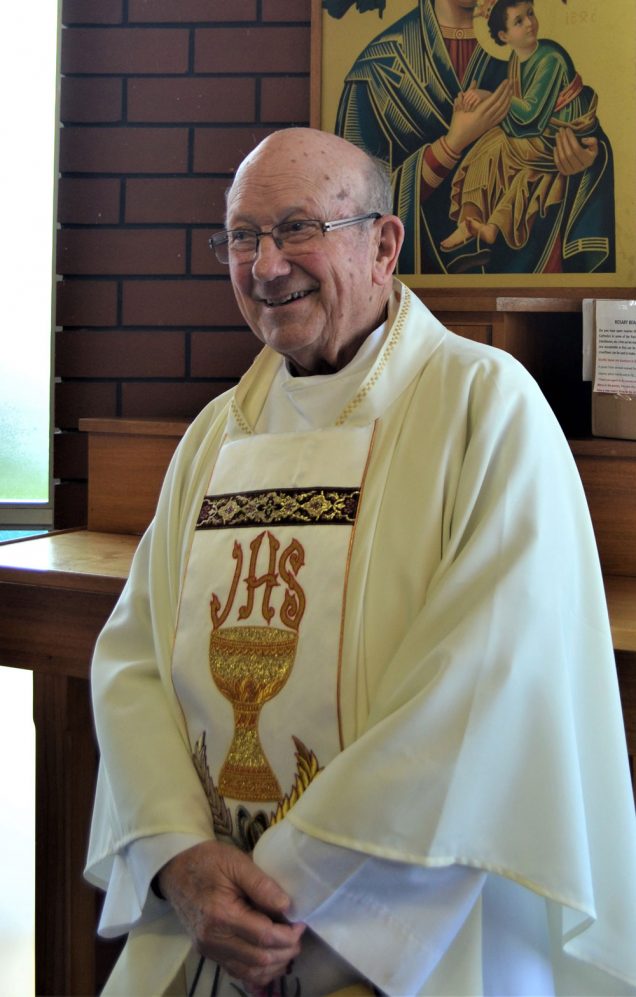 Laughter echoed throughout Our Lady of Lourdes Church in Devonport at a golden jubilee celebration for a much-loved priest.

Hundreds of people travelled from near and far to celebrate the 50th anniversary of ordination of Fr Phillip (Smiley) McCormack.

Known for his down-to-earth attitude, sense of humour and warm personality, Fr Phil, 78, was ordained to the priesthood by Archbishop Sir Guilford Young on July 30, 1971 at St Brendan’s College Hall, Devonport.

Archbishop Julian, Emeritus Archbishop Adrian Doyle, priests, Sisters of St Joseph, past and present parishioners, family and friends attended a Mass of Thanksgiving for Fr Phil on August 2. Fr Phil was the principal celebrant with concelebrating priests from throughout the diocese.

Born in Kimberley, in North West Tasmania, Fr Phil moved to Hobart as a teenager to study at St Virgil’s College.
Fr Phil explained his road to the priesthood: “In 1956 … Archbishop Guilford came to Latrobe and confirmed myself and my sister at St Patrick’s. He asked if I was interested in being a priest. I didn’t know any priests at that time – no priest had ever visited our home – but I must have said yes, because I ended up at St Virgil’s in 1957.”

To much laughter, an unassuming Fr Phil said he had not built anything in his time as a priest except the toilets at St Patrick’s Church, Scottsdale, and he had not organised anything, not even a chook raffle.

Fr Phil is known for his succinct sermons, trademark cap and support for the Sydney Swans AFL team.

Archbishop Julian said it was fitting that the golden jubilee – ‘a day of great joy’ – take place in Devonport, where Fr Phil’s ordination took place. He paid tribute to Fr Phil’s special gifts in his priestly life.

“Pope Francis encourages priests to accompany people, to walk with them … on the journey and be with them for the highs and the lows, the times of joy, the times of sadness,” Archbishop Julian said.

“That is part of priestly ministry and I think Fr Phil has very much exemplified that, walking with people in the parishes, [and] in the vast array of friendships and relationships he has built up over the past 50 years. He will walk with you on your journey. He has been there, always expressing great friendship, warmth and openness to people.

“That is a real priest, a pastor, one whose heart is

devoted to the wellbeing of the people and we salute that in Fr Phil today as we celebrate his 50 years.”

“[W]e are able to come together with him to celebrate these 50 years of his life as a priest … 50 years of magnificent, wondrous blessing from God in Phillip McCormack who is a priest among us and a priest for us, enabling each one of us, like the apostles on the Transfiguration Mountain, to look up and see only Jesus,” Fr Freeman said.

“Because he has put into practice the gospel that he obviously knows so well, over which he has prayed so often and so deeply, and enabled us to hear the word of the Lord…”