A lifelong devotion to St Joseph 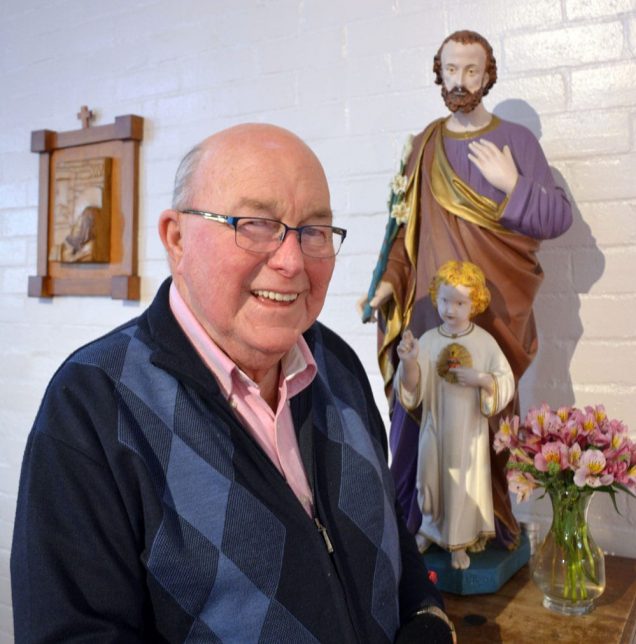 For many Catholics, this year had been one of discovering or going deeper in devotion to St Joseph, but for Glenorchy’s Des Mortimer, devotion to the saint has been part of his life since the third grade.

Originally from the interstate, Mr Mortimer, 84, spent his early years in country Victoria, and he and his wife Beris were married in Penshurst – appropriately, at St Joseph’s Church.

His devotion to the foster father of Jesus came through his third and fourth grade teacher, Sr Cordelia, a Good Samaritan Sister who also gave him a love of St Anthony.

“From that it just grew,” he said.

His devotion to St Joseph takes a number of forms: from “wearing out books” written on the saint; to handing out medals of St Joseph to people trying to sell their home (he says the tally is nearly at 100 medals and 100 homes); and now leading a monthly prayer group at Glenorchy Parish called the Apostolate of St Joseph of the Eternal Family.

“I was at Mass when Fr Laurie [Moate SDB] announced it,” Mr Mortimer said.

“He said: ‘You know someone in this church, he’s even here tonight, is going to be happy when I tell him that St Joseph is to be included in the canon.’”

Mr Mortimer says he was so excited by the news that he stood up in the middle of Mass and said, “You beauty!”

Fr Laurie gave permission for the prayer group to begin, and now Fr Guy Riolo SDB – the current parish priest – joins in with the prayers each month.

Fr Mortimer says the aim of the Glenorchy prayer group is to encourage people to develop a devotion to St Joseph.

“We’re up to fifteen [regulars]. Because it’s Wednesdays in the parish, we have benediction and exposition [of the Blessed Sacrament] and then we have the prayer group,” he said.

The Apostolate of St Joseph of the Eternal Family can be a personal, or a group devotion, and should be conducted on the first Wednesday of each month, Mr Mortimer explained.

The Glenorchy group is made up of members from several parishes, and Des hopes that they will be able to spread the devotion and get prayer groups going in their own parishes.

“That’s what I’ll keep praying to St Joseph for,” he said.